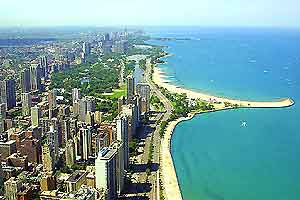 Chicago is one of the most important cities in America and is a top spot for both tourism and business. This city of skyscrapers enjoys a slightly unusual setting for such an important business destination, since Chicago lies alongside the beautiful Lake Michigan and comes with literally miles and miles of sandy beachfront.

The city is often referred to as the 'Queen of the Lake' and its skyline towers high above the waterfront, including a number of the tallest buildings in the world. Visitors searching for tourist information in the city are advised to look out for the Chicago Cultural Center on East Randolph Street, within the downtown 'Loop' area, and the Water Works Visitor Information Center on East Pearson Avenue, in the Magnificent Mile neighborhood.

Accommodation in Chicago can be a little expensive, particularly during big conventions and the summer music festivals, although there are certainly a large number of hotels to choose from. There are some excellent value Chicago vacation rentals and hotel deals to be found, even in the heart of the central Loop District, around McCormick Place and close to the Wrigley Field baseball stadium, particularly when you book in advance. Booking ahead is strongly recommended and at certain times of the year, in particular summer and Christmas, many of the Chicago hotels are filled to capacity. Hotels within the Loop are especially well-placed, with easy access to Grant Park and the business district, although not ideal for nightlife. Many tourists staying in the city favour accommodation in the Gold Coast / Near North area, and particularly around Lincoln Park - where lodging tends to be less expensive.

For budget travelers, various lodging options present themselves, although in general, don't expect to stay in the most convenient locations if you are looking to save your money. Camping sites are available, but generally at least an hour away in most directions, while a hostel, inn or guest house may prove to be the most practical option, with reliable choices being within walking distance of many places of interest, such as the Navy Pier, Grant Park and the renowned Magnificent Mile shops. The HI Chicago is the city's principal hostel and is located on the East Congress Parkway, where it comes with a useful information desk and even offers guided tours of the top sights, led by local volunteers. 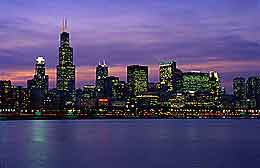 Chicago is full of interesting and appealing tourist attractions and historical landmarks. The very best of these include the famous Magnificent Mile - part of Michigan Avenue, a Mecca for shopping, being lined with literally hundreds of stores; the Harold Washington Library - one of the largest libraries in the world; the Hancock Observatory - with stunning views of the stars at night and spectacular panoramas of downtown; the North Avenue Beach - where many tourists go to swim, sunbathe and relax; the Chicago Willis Tower (formerly the Sears Tower) - built in 1973 and the world's tallest building until 1996; the Tribune Tower - one of the earliest skyscrapers, built in 1922; and the Navy Pier - an enormous pier constructed in 1914 for the local shipping industry and now full of an enormous range of entertainment and attractions, covering over 50 acres / 20 hectares in total. More information about Chicago Tourist Attractions and Chicago Landmarks.

There are also many excellent museums in Chicago, with the most highly regarded being the Clarke House Museum - the city's oldest house built in 1836; the Museum of Science and Industry - one of the world's largest science museums, packed with hands-on activities and educational information; and the Chicago Historical Society Museum - with nostalgic exhibits and many interactive displays. There are numerous art galleries as well, such as the Art Institute, which ranks amongst the top art galleries in the entire city and exhibits paintings from both famous and unknown artists, including impressionist and post-impressionist art by Monet, Van Gough, Renoir and other important names.

Chicago has many sporting facilities, including numerous spectator sports. The city is famously home to several world-class sports teams, the most notable of which is the Chicago Bears, who regularly play American football at the Soldier Field (formerly the Municipal Grant Park Stadium), where games can be watched by more than 60,000 seated spectators. Many World Cup football sports matches are played in the city and American football attracts a large following, with the season running from September to December.

There are a number of large green spaces in Chicago, such as Grant Park - covering over 300 acres / 120 hectares, a popular place for both tourists and locals alike; the splendid Chicago Botanic Gardens - attracting a whopping one million visitors every year; the Jackson Park - a spectacular public parkland opened in 1893, including a traditional Japanese garden on the 'Wooded Island'; and Lincoln Park - more than 1,200 acres / 485 hectares of parkland and landscaped gardens, providing excellent sports facilities and home to the popular Lincoln Park zoo, one of the largest zoological gardens in America.

Chicago has a fairly mild climate, although it can experience extremes in temperatures during the summer and winter. This spectacular city is one of America's most interesting and appealing, and really is worth a visit, particularly when the sun is shining and the beachfront is at its most inviting.