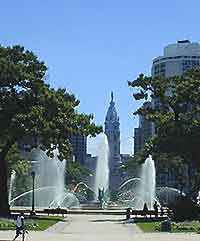 There are certainly plenty of hotels spread around the city of Philadelphia, with accommodation based in the downtown district generally being the most pricey. Cheaper lodging includes a number of small B&Bs and guest houses, although if you are looking for glamorous boutique-style hotels, you may well be disappointed. Further hotels within easy reach of downtown Philadelphia are based in nearby Cherry Hill, Cinnaminson and Gloucester City.

A choice of accommodation is also close to the Philadelphia International Airport (PHL), which is just 7 miles / 11 km to the southwest and alongside the Tinicum Township. The adjacent Marriott Philadelphia Airport Hotel is especially convenient and is actually connected to Terminal B by a sky-bridge. Close by and on the northerly Bartram Avenue is the Courtyard by Marriott, the Extended Stay Deluxe and the Hampton Inn, while just a block away is the Tinicum Boulevard, home of the Microtel Inn. On nearby Island Avenue, the upmarket Hilton Hotel is a particularly well-placed choice. 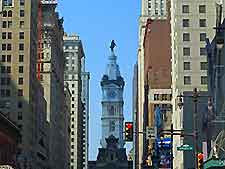 There is a fairly limited choice of budget accommodation in Philadelphia, with most hotels being at their cheapest during the weekend, when discount packages come along after business-week travelers leave the city. On the northeasterly side of the city, the Roosevelt Boulevard is where you will find the Ramada and also the Days Inn, which rank amongst the cheapest offerings around.

The Best Western City Center Hotel is another popular budget lodging option and stands on North 22nd Street, being just a block away from the acclaimed Rodin Museum on 22nd Street and the Benjamin Franklin Parkway. Backpackers and budget travelers in Philadelphia often favor the well-placed HI Bank St. Hostel on South Bank Street, which is near to the 2nd St. Station and many major attractions, such as the Independence Mall State Park and Penn's Landing. 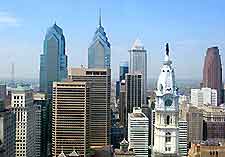 Falling in the mid-range lodging category, reasonably priced accommodation in Philadelphia includes the historic Penn's View on the corner of North Front Street and Market Street, which dates back almost 200 years and lies within the very heart of the Old City area, near to the Independence Hall and the Liberty Bell. Also popular is the Hotel Windsor and Suites on the Ben Franklin Parkway, and the Sheraton City Center Hotel on 17th and Race Street, which is near to the Pennsylvania Convention Center, Love Park and the Franklin Institute. Further hotels near to the Convention Center include both the Courtyard by Marriott on North Juniper Street and the Hilton Garden Inn on Arch Street.

Luxury hotels in Philadelphia are generally concentrated around Arch Street, the Avenue of the Arts, Dock Street and South 17th Street. Especially plush is the accommodation awaiting at the five-star Ritz Carlton on the Avenue of the Arts, which incorporates the 1930 Girard Trust Building and rather dominates this part of the city with its 30 floors. On Logan Square, the Four Seasons is another notable luxury hotel, as is the Hyatt at the Bellevue on South Broad Street, next to the Avenue of the Arts, where the onsite XIX (Nineteen) Restaurant is actually the highest in the whole of Philadelphia and comes with cityscape views to match its status.