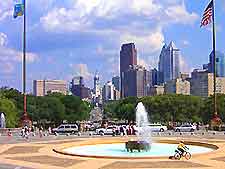 Philadelphia, the 'City of Brotherly Love' has several notable and interesting districts lying in Philadelphia's downtown area that harbor some of the country's most treasured historical sights and are easily navigable on foot.

After the bicentennial in 1976, a lot of time and money was invested in getting Philadelphia back up to par so it would be able to compete with cities elsewhere in the country. Philadelphia's success of this rejuvenation effort is evident in the major renovation works that have ensued throughout Philadelphia city.

Dominated by the elaborate City Hall, with a huge bronze statue of William Penn atop, Philadelphia's main thoroughfare houses some of the city's most outstanding attractions and a swathe of restaurants and shops. Almost stretching from the Delaware River to the Schuylkill River, Philadelphia's Center City district conveniently borders Chinatown in the north and the Old City in the east and houses gems such as the Museum of American Art and the ancient Reading Terminal Market. 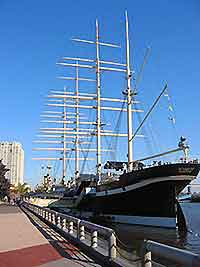 Penn's Landing was the site where the Englishman and Quaker, William Penn, stepped ashore from the Delaware River in 1682. A hive of activity, this area of Philadelphia is scattered with must-see attractions including the brilliant Independence Seaport Museum, the USS Olympia and the four-masted Moshulu sailing ship. Philadelphia's Penn's Landing district is marked by an attractive riverfront park and numerous restaurants and shops along with a multitude of entertainment options for the whole family.

Situated in the Old City area of downtown Philadelphia is America's most historic square mile, Independence National Historical Park (INHP), which undoubtedly contains the nation's most important buildings, symbols and icons. The area only covers four blocks and is therefore easy to get about on foot. Georgian and Federalist-style buildings are evident here and major sights not to be missed include Independence Hall, Liberty Bell, Christ Church, Carpenters' Hall and Powel House.

Philadelphia's Rittenhouse Square is as elegant as you may have read and is perfect for an afternoon stroll. One of Pennsylvania's original city squares, it was once bordered by historic townhouses, some of which still remain. Nowadays the area is mainly given over to modern yet attractive hotels and apartment buildings. The square is ideal for picnicking and there is no shortage of cafés nearby.

Lying west of Philadelphia's Center City on the banks of the Schuylkill River, the National Historic District of Manayunk is a favorite shopping and dining destination with Philadelphians and visitors alike and boasts scores of fashionable boutiques and dozens of quality restaurants. 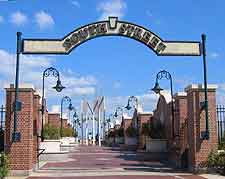 Running east-west at the southern end of Center City is the hippest part of Philadelphia, South Street. This is where tattoo artists and the New Age theme is thriving and a stroll along the street by day or at night will reveal a mass of humanity engaged in idle chit chat in the profusion of coffee bars and funky cafés.

The Italian Market is America's largest outdoor market and only a short cab ride or easy walk from Philadelphia's Center City district. The market is a mishmash of museums and eateries, and there is an unending availability of fresh meats, cheeses and pastas which together give off irresistible aromas.