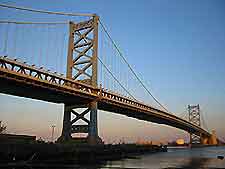 Landmarks and monuments in Philadelphia are historic edifices that had a great impact on the newly formed republic back in the latter part of the 18th century. With most having now been restored to their former glory, a tour of the monuments and buildings in Philadelphia can be extremely rewarding.

Philadelphia's City Hall is massive and stands out with the endearing statue of Penn on top, while Carpenter's Hall and Christ Church are works of art.

Address: 5th and Vine Streets, Philadelphia, Pennsylvania PA, USA
Designed by Paul Cret and completed in 1926, the Benjamin Franklin Bridge in Philadelphia was then the world's largest single-span suspension bridge. Today this important Philadelphia bridge not only provides transport for cars, trains and pedestrians across the Delaware River, but it also provides a fantastic and free light show. Created for the bicentennial by a renowned American architect, the light show illuminates the bridge's cables every night.
Open hours: daily - 06:00 to dusk
Admission: free 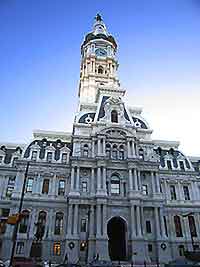 Address: Broad and Market Streets, Philadelphia, Pennsylvania PA, USA
Tel: +1 215 686 2840
Once the tallest building in Philadelphia and also the world's tallest masonry-bearing structure, City Hall was completed in 1900. Boasting a huge bronze statue of city planner William Penn atop the structure, the hall offers grand views over the city. Having taken almost 30 years to complete, Philadelphia's City Hall lies at the heart of the original city plan and features the Supreme Court of Pennsylvania and the Conversation Hall, which can both be seen on a free tour. Look out for some of the stunning interior fixtures, fittings and furnishings, such as the massive marble pillars and mahogany paneling.
Open hours: Monday to Friday - 09:30 to 16:15
Admission: free

Address: 244 South 3rd Street, Philadelphia, Pennsylvania PA, USA
Tel: +1 215 627 0364
Built in 1765 and later bought by Mayor Samuel Powel, this Georgian home is one of the most beautiful in Philadelphia. Known as the 'Patriot Mayor', Powel was the last mayor of Philadelphia under the British crown and he held the title as the first mayor of the city in the newly independent America. Facing demolition in 1930, Powel House has been restored to its former glory and contains 18th-century Philadelphia furniture and a Santo Domingo mahogany staircase. Important guests were once entertained in the 2nd floor ballroom and today the same room can be rented out for special events.
Open hours: Thursday to Saturday - 12:00 to 17:00, Sunday - 13:00 to 17:00
Admission: charge, discount for families 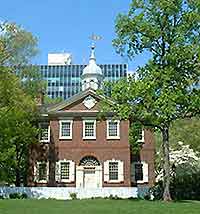 Address: 320 Chestnut Street, Philadelphia, Pennsylvania PA, USA
Tel: +1 215 925 0167
Originally designed by Robert Smith as the guildhall for Philadelphia's burgeoning carpenter community, the Georgian Carpenter's Hall was used by prominent figures as a place to discuss dealings with the crown. Today, all that is left are the Windsor chairs used by the First Continental Congress, some portraits and an exhibit on colonial building methods. Philadelphia's Carpenter's Hall is constructed of Flemish Bond brick, while the gilding and fanlights date from a later period; there is also some ornate woodwork.
Open hours: Tuesday to Sunday - 10:00 to 16:00, seasonal variations apply
Admission: free