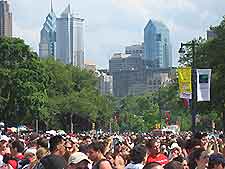 Philadelphia offers visitors an enticing calendar of festivals, events and things to do throughout the year. The birthplace of the nation takes its Fourth of July festivities seriously and Philadelphia's massive Mummers Parade which kicks the year off is an exciting 300-year-old event, attracting thousands of dressed-up participants on New Year's Day.

Food, flower and arts festivals are also popular and the city of Philadelphia hosts a major men's and women's international pro cycling event, one of the biggest of its type in the country.