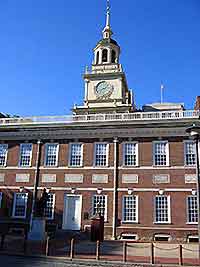 Address: Chestnut Street, between 5th and 6th Streets, Philadelphia, Pennsylvania PA, USA
Tel: +1 215 965 2305
Just opposite the Liberty Bell, Philadelphia's Independence Hall holds a great deal of history and pride as the birthplace of the United States. Completed in 1756 out of red brick and sporting a clock tower, today Independence Hall is one of America's greatest icons and a major tourist attraction in Philadelphia. The most important room in the building is the Assembly Room, where George Washington became commander in chief of the Continental Army, Thomas Jefferson signed the Declaration of Independence, and the Constitution of the United States came to fruition. A statue of George Washington stands outside Independence Hall along with plaques honoring Abraham Lincoln and John F. Kennedy.
Open hours: daily - 09:00 to 17:00
Admission: free 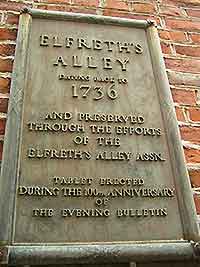 Address: 2nd Street, between Arch and Race Streets, Philadelphia, Pennsylvania PA, USA
Tel: +1 215 574 0560
Dating from the early 1700s, Elfreth's Alley is America's oldest continuously occupied residential street and this popular tourist attraction is indicative of what much of Colonial Philadelphia would have once looked like. The cobbled, narrow streets are lined with modest brick houses built for Philadelphia's skilled folk and their families. Also situated along Elfreth's Alley is Elfreth's Alley Museum, which includes two restored homes, the former of which was once the home of a chair maker, while the latter belonged to a dressmaker. Most of the homes along Philadelphia's Elfreth's Alley open up to the public during a weekend in June known as Fete Days.
Open hours: Monday to Saturday - 10:00 to 17:00, Sunday - 12:00 to 17:00, seasonal variations apply
Admission: charge for museum 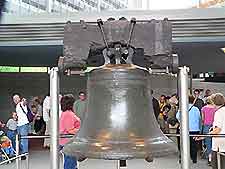 Address: Chestnut Street, between 5th and 6th Streets, Philadelphia, Pennsylvania PA, USA
Tel: +1 215 965 2305
Across from Philadelphia's Independence Hall is another great American symbol of freedom and one of the city's most historic tourist attractions, the Liberty Bell. Housed in a massive glass pavilion, the bell was originally housed in Independence Hall until it was moved to its present location for the 1976 Bicentennial. Known as the State House Bell and once tolled to beckon locals in Philadelphia for the hearing of the Declaration outside the State House (now Independence Hall), it wasn't until 1830 that the bell was renamed the Liberty Bell. There are many theories explaining the famous crack in the bell, including its splitting during testing and while being tolled during John Marshall's state funeral, although it's likely it simply occurred slowly over time. As a result the Liberty Bell remains silent.
Open hours: daily - 09:00 to 17:00
Admission: free 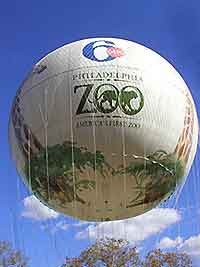 Address: 34th Street/ 3400 West Girard Avenue, West Fairmount Park, Philadelphia, Pennsylvania PA, USA
Tel: +1 215 243 5385
Located near Fairmount Park, Philadelphia Zoo was America's first, opened in 1874 in time for the country's first hundred year celebration of independence. The zoo has over 2,000 animals and many attractions, as well as excellent set-ups allowing visitors to get right up close to the animals. Notable attractions at Philadelphia Zoo include the Primate Reserve, Amphibian and Reptile House, Carnivore Kingdom, Bird House, African Plains and the superb Children's Zoo. For an overall perspective and for great views over Philadelphia Zoo and Fairmount Park, ride the Zooballoon to a lofty 120 meters / 400 feet.
Open hours: Monday to Friday - 09:30 to 17:00, Saturday and Sunday - 09:30 to 18:00, seasonal variations apply
Admission: charge, discounts for children and families, children under two free