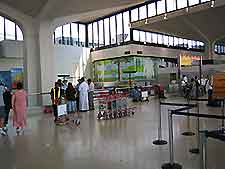 From the city center, Philadelphia International Airport is easy to reach, offering a range of ground transportation options, such as shuttle buses, trains, taxis and car hire. The airport is located on the southwestern side of the city, next to the Darby Township, the Tinicum Township and Essington, and resides on the northern bank of the Schuylkill River.

Philadelphia's airport began its life in the mid-1920s, when it was used solely as a training airfield and referred to as Hog Island. In 1940, the building of its first terminal saw the arrival of commercial flights, and today, the airport boasts close to 500,000 flights each year, with more than 2.5 million passengers every month. As one of the world's busiest, PHL is now working at maximum capacity and its facilities are regularly stretched, with the 17,000 car parking spaces often being completely filled.

Address: 8500 Essington Avenue, Philadelphia, 19153, Pennsylvania PA, USA
Telephone: +1 215 937 6937
Philadelphia Airport can be found just 7 miles / 11 km from the city center, being just a short distance to the south of the John Heinz National Wildlife Refuge. Both domestic and international airlines are served here.

The airport now comes with seven large terminal buildings, serving major airlines such as Delta, Southwest Airlines, United Airlines and US Airways. Each terminal is subdivided into a series of lettered concourses.

Operated by the Southeastern Pennsylvania Transportation Authority (SEPTA), high-speed trains travel directly to and from the airport from terminals A to E, running between 04:00 and midnight, usually at least twice an hour. One-day 'Independence' passes offer unlimited use of the trains and may prove cost effective if you have a busy day of traveling planned. Of note, the stations are Eastwick, University City, 30th Street, the Suburban Station and Market East.

Shuttle buses are a popular method of ground transportation and run to a range of destinations around the city center. Official SEPTA buses operate from Zone 1, while shared-ride vans are based at Zone 7 and charter buses at Zone 8.

Taxis are plentiful and run all through the day and night, with the main taxi rank being situated in the Zone 5 area of the Commercial Transportation Roadway. Most cabs can take three passengers, although larger vehicles are available, accommodating up to four people. The journey into the city center should last no longer than 20 minutes, when traffic levels are reasonable. Flat rates to fixed destinations in the city center are offered, including the most easterly point of the Delaware River, Fairmount Avenue, South Street and 38th Street / University City.