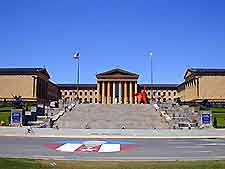 Amongst the city's superb collection of art galleries is the oldest art school in the country, the best collection of Rodin's work outside of France, and the gargantuan Philadelphia Museum of Art, which is a must-see and situated on the Ben Franklin Parkway. This grand museum has so many artistic wonders, including works by Picasso and Van Gogh, that you could quite literally spend hours here.

The city also boasts the Woodmere Art Museum, showcasing contributions by local artists, together with a host of other impressive art galleries. Further reliable gallery spaces include the Pennsylvania Academy of Fine Arts on North Broad Street, which was established more than 200 years ago and remains extremely popular. A trip to the Athenaeum of Philadelphia on South 6th Street may also be of interest to tourists searching for an afternoon of serious culture. 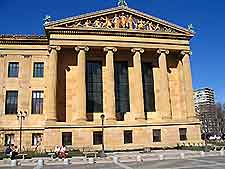 Address: 2600 Benjamin Franklin Parkway, Philadelphia, Pennsylvania PA, 19130, USA
Tel: +1 215 763 8100
The Philadelphia Museum of Art is the city's premier cultural attraction, with the building itself being worth a visit in its own right, since the grand structure resembles a Greek temple. There are some outstanding works of art housed here, including the Arensberg and A E Gallatin Collection, the John G Johnson Collection and contemporary pieces by the likes of Picasso and Matisse. Picasso's 'Three Musicians', Van Gogh's 'Sunflowers', Rubens' 'Prometheus Bound' and Van Eyck's 'St. Francis Receiving the Stigmata' are all here in the museum's art galleries, among many other world-renowned pieces. The Philadelphia Museum of Art also features a large collection of American art, as well as a 12th-century French cloister and Indian, Chinese and Japanese temples.
Open hours: Tuesday to Thursday, Saturday and Sunday - 10:00 to 17:00, Friday - 10:00 to 20:45
Admission: charge, discount available for seniors, students and children under 18 years old, children 12 years old and under are free

Address: 219 South 6th Street, Washington Square East, Philadelphia, Pennsylvania PA, 19106-3719, USA
Tel: +1 215 925 2688
Standing next to Washington Square and close to the St. George Greek Orthodox Cathedral, the Athenaeum of Philadelphia covers American Victorian-period architectural design and is housed in an elegant 19th-century building, which has been restored to its former glory. The collection is comprehensive and there are over one million rare books, photographs and drawings based here, on the first-floor.
Open hours: Monday to Friday - 09:00 to 17:00
Admission: free

Address: 22nd Street and Benjamin Franklin Parkway, Philadelphia, Pennsylvania PA, 19101-7646, USA
Tel: +1 215 763 8100
Occupying a beautiful building designed by two renowned French architects, the Rodin Museum houses a number of spacious galleries displaying some prominent works, including the massive sculpture, 'Gates of Hell', 'The Kiss' and 'Eternal Springtime', among other notable works. A room is also devoted to Rodin's number one sitter, the French novelist Balzac, and photographs taken by Edward Steichen of the artist working are also part of the display.
Open hours: Tuesday to Saturday - 10:00 to 17:00
Admission: by donation only

Address: 128 North Broad Street, Philadelphia, Pennsylvania PA, 19102-1424 USA
Tel: +1 215 972 7600
Close to JFK Plaza Shopping Center and the YMCA, this is actually the nation's oldest arts school and museum, and contains a growing permanent collection of masterpieces, as well as brilliant changing exhibitions featuring paintings and sculptures. Works at Philadelphia's Pennsylvania Academy of Fine Arts include those by Gilbert Stuart, Winslow Homer, Richard Diebenkorn, Benjamin West and the Peale family. Those who have a love of architecture will also greatly enjoy the building itself - an exquisite 19th-century Victorian Gothic structure with a striking multicolor exterior and beautiful interior.
Open hours: Tuesday to Saturday - 10:00 to 17:00, Sunday - 11:00 to 17:00
Admission: charge

Address: 9201 Germantown Avenue, Philadelphia, Pennsylvania PA, 19118-2618, USA
Tel: +1 215 247 0476
Lying on the northern side of the city, this all-encompassing art museum has a huge variety of paintings and prints by Philadelphia artists, and covers 19th- and 20th-century American art, as well as European pieces and numerous decorative arts, such as sculptures and tapestries. Frederick Church and Benjamin West are well represented at the Woodmere Art Museum and works by the Pennsylvania impressionists, Daniel Garber and Edward Redfield, are also featured. Nearby attractions include the Chestnut Hill College and the Morris Arboretum.
Open hours: Tuesday to Saturday - 10:00 to 17:00, Sunday - 13:00 to 17:00
Admission: charge