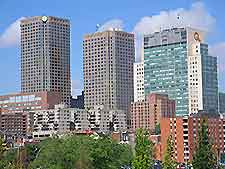 Quebec province's main transport hub is the Montreal Pierre Elliott Trudeau International Airport. It is in fact Canada's third-busiest airport, serving Montreal, the greater province of Quebec, and even the American states of Vermont and New York. In excess of 13 million passengers use this complex annually, on over 30 airlines that now serve more than 100 destinations around the Americas and Europe.

Most of the air traffic is international, mainly with Air Canada, which uses Montreal's airport as one of its principal hubs. Recent improvements to the terminal have both modernized it and added a wealth of new amenities, including a four-star Marriott hotel and a dedicated concourse for US flights.

The unique situation of Trudeau Airport means that the terminal is separated into domestic, international and US / Canada transborder areas. Each of the three zones has a good range of shops, eateries and other services, while there is also a VIP lounge.

Three major highways run from the Montreal Pierre Elliott Trudeau International Airport to all areas of the city, via routes 20, 40 and 13. All taxis at the airport are licensed and use a fixed rate for downtown destinations. For journeys to destinations outside the downtown core, taxi meters are used. Private limousines are also available at the Arrivals area and several downtown Montreal hotels now offer pick-up services for their customers.

VIA Rail Canada services the airport from long distance destinations outside of Montreal, while Skyport runs a seasonal shuttle directly to the popular Mont Tremblant ski resort during the summer and winter seasons.