Getting Around, Montreal Travel, Transport and Car Rental 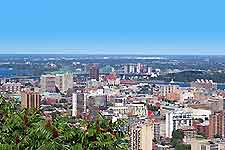 Montreal is an important transportation hub in east Canada, comprising a major airport, many nearby highways / autoroutes, train travel, bus transport throughout the city and more than 60 Metro subway stations. The Old Port area of Montreal also provides a number of maritime connections and regular ferries.

The main public transport network in the city is operated by the Société des Transports de Montreal, which is also known as the STM. Guided bus tours provide a particularly popular way to travel around the city and learn some useful historic information on the way. 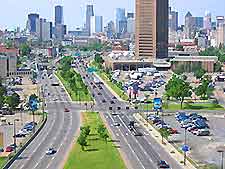 A number of major roads and autoroutes serve the city of Montreal. These include:


With an organized grid-style network of roads in central Montreal, traffic generally moves smoothly and the city is easy to travel around by car. However, at peak times, congestion can be a problem. Four road bridges and one tunnel cross the St. Lawrence River, whereas eight road bridges cross the nearby narrower Prairies River. One of the most notable transport bridges in the Montreal area is the Jacques Cartier Bridge, which spans the scenic St. Lawrence River and connects nearby Longueuil.

Renting a car is a particularly popular way to travel around the city and explore the surrounding areas of Quebec. Cars can be readily hired at Montreal Airport, with all major car rental companies available onsite.

Public bus transport in Montreal is cheap, reliable and convenient, and is operated by the Société de Transport de Montréal (STM). The main bus station in the city is the Voyageur Bus Terminal in the downtown district, on Maisonneuve Boulevard East. Buses depart from this station from 06:00 to midnight each day and travel around more than 150 different routes. Bus drivers in Montreal do not actually sell tickets onboard and these can be purchased from convenience stores and metro stations, where there are often manned booths and ticket machines.

Guided bus tours are another popular way to travel around and also provide the perfect opportunity for some serious sightseeing. Known as the Greater Montreal Guided Tram Tour, these buses include an experienced guide and depart from the Infotouriste Center, next to the Place du Canada.

Served by Amtrak trains, the regional rail network is a popular way to arrive in the city from North America, with regular trains that travel between Montreal and New York in around 11 hours. Trains are also operated by Via, Canada's national rail transport company, connecting all of the country's main cities. The principal train stations, the Gare Centrale (Central Station) and the Windsor Station, are both located in downtown Montreal, with access to the 'Underground City'.

Created in 1966, just in time for Montreal's 1967 Expo extravaganza, the McGill Metro Station serves as a popular commuter rail network. With more than 60 train stations and four separate lines (Blue, Green, Orange and Yellow), Metro subway travel in the city is both fast and inexpensive, with around 170 different routes being available. Open from 05:30 through 01:00, weekly Metro passes provide good value for money. The Metro subway is operated by the city's Société de Transport de Montréal (STM).

Taxis in Montreal are known for their expensive rates, although they are always easy to find. Located at various taxi ranks within the city center, taxis can also be hailed on the street. Taxi cabs are also a popular method of ground transport at the nearby airport.

Regarded as one of the best cities to cycle around in Canada, bicycles can be hired from a number of cycle shops in the Old Port and other central locations. Numerous bicycle paths exist throughout Montreal and cycling is one of the most relaxing ways to travel around the city's scenic outskirts.