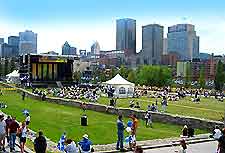 A multiethnic city, Montreal is divided into many local communities and districts, including both English and French speaking neighborhoods. Much of Montreal has a definite European flavor and city life is centered around the downtown district, where many of the most popular hotels, restaurants and attractions are located.

Notable districts include the historic Old Montreal district - where a large amount of period architecture can be found, Little Italy - featuring many authentic Italian restaurants, the Village - the heart of the city's gay community, the Latin Quarter - known for its traditional bistros, and Chinatown - full of colorful oriental buildings. 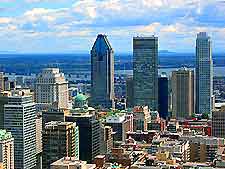 Downtown Montreal stands next to Mount Royal Park, a vast urban space with a host of recreational activities. Many stunning skyscrapers are clustered in the city's downtown district, and are not permitted to be higher than the nearby Mount Royal mountain. Downtown's central axis is the popular Sainte Catherine Street, which is lined with an enormous selection of shops. Montreal's main businesses are situated in modern buildings of the downtown district, contrasting with a number of historical structures and hotels. The downtown district stands between the St. Lawrence River and the Mount Royal mountain and includes the cruciform office tower, which stands above a large underground shopping mall. This is part of the 'Underground City' complex, with access to more than 1,500 shops. Downtown's skyline is regarded as one of the most attractive cityscapes in the world. 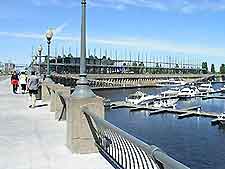 Old Montreal is situated to the southeast of the city's downtown district. Full of history and heritage, many of the city's oldest and most notable buildings can be found in this district, including the imposing Notre Dame Basilica, together with charismatic cobbled streets. Much of Old Montreal has been restored and is well maintained, incorporating the Griffintown neighborhood and the Old Port. This area is well served by regular ferries and contains many waterfront attractions, historic museums and period hotels.

Griffintown spans the Old Port to the Pont St. Charles area, and also north towards Notre Dame. One of the oldest areas of the city, the Griffintown district was founded in the mid-19th century by early Irish settlers, and highlights include horse and carriage tours around the Old Port, period architecture and a number of modern technology businesses.

The city's Latin Quarter is centered around St. Denis Street, Sherbrooke Street and the Maisonneuve Boulevard. This lively bistro district has much to offer, with many restaurants featuring seasonal al fresco dining areas. Montreal's Latin Quarter is fundamentally a young area, with students often congregating is this district, particularly during the summer evenings. 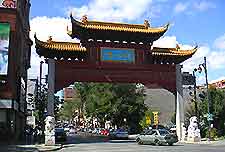 Standing to the south of downtown Montreal, the animated Chinatown district features many typical Chinese restaurants, shops and oriental establishments. Based around La Gauchetiere Street and St. Laurent Boulevard, some Asian restaurants in Chinatown district serve dim sum from as early as 07:00. Chinatown's earliest residents arrived here in the 1860s and this district has evolved into a bustling part of the city, known for its cuisine, culture, pagoda-style rooftops and dramatic Oriental gateway.

The Plateau district is a colorful and trendy neighborhood and can be found along the north / south axis of St. Denis Street and St. Laurent Boulevard, close to Mount Royal Avenue. The Plateau is a densely populated district, with many historic areas, including cobbled streets and 19th-century homes. With numerous multiethnic stores, funky shops, outdoor cafés and plenty of restaurants, the Montreal Plateau is known for its nightlife, which is particularly lively during the summer months. Prince Arthur Street and the Duluth Avenue are notable areas in the Plateau district, for both strolling and eating.

The Mile End neighborhood is a small district, bounded by Laurier Avenue to the south, Bernard Street to the north, Parc Avenue to the east, and St. Laurent Boulevard to the west. With a high concentration of French and Greek communities, Mile End contains the Ubisoft studios, a major interactive games company, and is also close to the exclusive Outremont neighborhood.

When entering the Little Italy district of Montreal you will discover a traditional and authentic Italian area of the city. With a number of classical Italian restaurants lining the St. Laurent Boulevard, Little Italy is bounded by Jean Talon Street, St. Zoutique Street, St. Denis Boulevard and Clark Street. A noteworthy attraction here is the busy Jean Talon Market, which is a favorite place to visit each Saturday, with many coffee shops and espresso bars nearby. 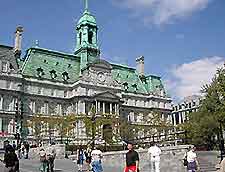 The Lachine area of Montreal lies around the Canal de Lachine and contains many historical buildings, featuring impressive architecture. This district is by no means touristy and contains a strong local character, with a feeling of the city's early cultural roots. Some of the best sights in the Lachine district stand along the St. Joseph Boulevard and behind the College Sainte Anne Nunnery and City Hall.

Famous for being home to the city's large and legendary gay community, the Village is often simply known as 'The Gay Village'. Montreal contains one of the largest gay communities in the whole of North America and The Village district is at the heart of gay city life, being based around Sainte Catherine Street East, St. Hubert Street and the Papineau Avenue. This vibrant area has been extensively renovated and is now full of restaurants, shops, bars and nightclubs, and each year hosts the extravagant Divers / Cité Gay and Lesbian Pride in late July, attracting more than one million people.