Montreal Weather, When to Go and Climate Information 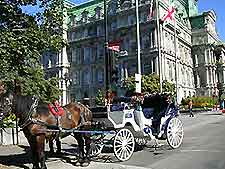 Montreal is situated close to the Atlantic Ocean where several distinct climatic sections merge, resulting in Montreal featuring a fairly variable climate and changeable weather throughout the year, season by season. Regarded as part of city life by locals, the weather in Montreal is typical of many Canadian cities, with hot summers and cold winters.

The seasons in Montreal are quite individual and lying close to the southern North America border, Montreal's general climate is warmer than those cities in northern Canada, with more favorable summer weather. 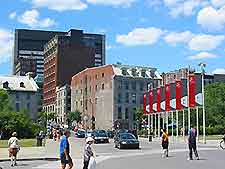 The spring climate in Montreal can be particularly pleasant, with temperatures beginning and rise and general weather conditions improving. Late May is a popular time to visit the city, when temperatures are much warmer, averaging around 18°C / 64°F. Occasional snow flurries in spring are not unknown.

July and August are the warmest months in Montreal and throughout Canada, although rain showers can also be fairly commonplace in the summer months, often followed by strong sunshine. Temperatures peak in July, with highs of up to 26°C / 79°F, but temperatures can rise to above 30°C / 86°F on occasion.

Many people choose to visit Montreal during the fall season, when the weather and climate is still fine and the sugar maples are beginning to change color, with spectacular autumnal shades. Fall temperatures can be quite warm and late summers are not unheard of. September's temperature peaks at around 19°C / 66°F, with many seasonal events being popular during this month, before the cold winter weather arrives.

The winter weather in Montreal is cold, with the coldest month being January, when daytime temperatures generally stay below freezing, averaging around -6°C / 21°F. Wind chill during the winter in Montreal is an important factor to consider and you should always dress accordingly. Weather forecasts in Montreal always take into account the possibility of wind chill at this time of the year. Rainfall in the winter months is not noticeably different in October and November, with an average of eight to nine rainy days, although the colder months of December and January average around just four to five rainy days. Snowy weather is more common during these months, with snow usually falling on more than ten days each month. The average annual snowfall in Montreal is approximately 2.1 meters / 6.9 feet.