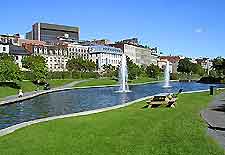 The city of Montreal is home to a surprising number of large parks and gardens, many of which are often located in the heart of central Montreal. Providing perfect respite from busy city life, Montreal's parks are unique, for where else in the world offers such a range of winter sports in the city center - including cross-country skiing and numerous ice-skating rinks?

During the summer months, the many parks and gardens in Montreal offer secluded picnic areas, playing fields and colorful planting. One of the most impressive attractions in the city is the Montreal Botanical Gardens, which contain many outstanding plant specimens and areas to relax. Here are Montreal's main parks and gardens. 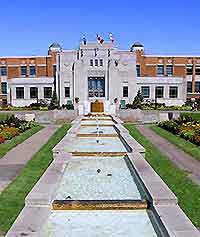 Address: 4101 Sherbrooke East, Montreal, Quebec (QC), H1X 2B2, Canada
Tel: +1 514 872 1400
A major attraction in the city, the Montreal Botanical Gardens is home to an array of over 20,000 plant species from all over the world, including many exotic specimens and impressive collections. Regarded as one of the best botanical gardens in the world, the Montreal Botanical Gardens contain a number of beautifully landscaped gardens, numerous vast greenhouses, an arboretum with ancient trees, regular guided tours, seasonal workshops, a dining room and a large library.
Open hours: Tuesday to Sunday, January to May - 09:00 to 17:00, June to September - 09:00 to 18:00, October - 09:00 to 21:00, December - 09:00 to 17:00
Admission: charge, discounts for children, students and seniors, children under five free 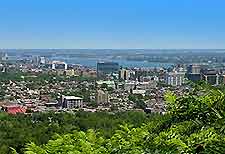 Address: 3933 Parc Lafontaine, Montreal, Quebec (QC), H2L 3M6, Canada
Tel: +1 514 872 3947
One of the largest parks in Montreal, Parc Lafontaine covers around 100 acres / 40 hectares, with mature trees and an outdoor summer theater. Other attractions at the Parc Lafontaine include a number of monuments, tennis courts, trails, benches and a large pond, which becomes frozen in the winter and is used for ice skating.
Open hours: daily - 06:00 to midnight
Admission: free

Address: Pie-IX east to Viau, Montreal, Quebec (QC), H1X 2B1, Canada
Tel: +1 514 872 6555
Nearby to Montreal's Olympic Park, the Parc Maisonneuve is a converted golf course, with excellent sporting and recreational facilities, including playing fields and picnic spots. In the winter months there is also an ice-skating rink and even cross-country skiing. Parc Maisonneuve is a fairly quiet park and worthy of a visit, being the perfect place to escape from the hustle and bustle of city life.
Open hours: daily - 06:00 to midnight
Admission: free

Address: Pierre Dupuy Avenue, Montreal, Quebec (QC), H3C 3R6, Canada
The Parc de la Cité-du-Havre stands on the eastern side of downtown Montreal and was originally the gateway to the city's 1967 Expo event. In the early 1980s, the park was built to conserve this important area of green and ensure that the stunning waterfront views remain. Highlights at the Parc de la Cité du Havre include cycle trails, picnic spots and playground areas for children.
Open hours: May to Labor Day, daily - 10:00 to 22:00
Admission: free