The city of Montreal is very much a mixture of old and new, with hotels to suit all needs and requirements. During the summer months, accommodation in Montreal is particularly in demand, and many hotels quickly fill to capacity.

Occupancy levels and lodging rates are not only affected by the fine summer weather, but also by the city's seasonal events, such as the Grand Prix of Canada (Montreal Grand Prix) and the International Jazz Festival each June. Accommodation also becomes scarce in July, when the Just For Laughs Festival is staged and enormous crowds descend upon the city's hotels, especially around the Latin Quarter (Quartier Latin).

Most of the city's modern and largest hotels can be found in and around the downtown district, which is often nicknamed 'New Montreal'. Lodging in downtown is well placed for exploration of the city, either on foot or by public transport. 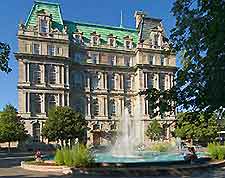 Old Montreal is another particularly popular part of the city and is home to some of the best restaurants, although generally speaking, the standard of accommodation in Old Montreal is second to the downtown district, with inns (auberges) being especially plentiful. Hotels in this area tend to provide a degree of charm and character, together with appealing historic architecture, which dates back to the 18th and 19th century and often has a somewhat European flavor. Hotels in Old Montreal are never far from the waterfront, nightlife and the scenic Old Port, being connected to the downtown district by the 'Underground City' network and the nearby World Trade Center.

Further hotels can be found clustered around Sainte Catherine Street - which is lined with shops and department stores, and within the eastern and western suburbs of downtown Montreal - including many budget hotels around Sherbrooke Street and the McGill University. Also, the Chinatown district is home to some of the city's most colorful lodging and authentic Chinese restaurants, while further hotels are concentrated around the Montreal Pierre Elliott Trudeau International Airport (previously named Dorval), which stands approximately 16 miles / 25 km to the west of the city center, alongside the Côte Saint-Luc suburb.

Cheaper accommodation is available within the Plateau and Village districts, where well-placed B&Bs reside in the heart of the action. Budget travelers will likely favor the lodging available at the HI Montreal International Youth Hostel on the Rue Mackay, while for a taster of five-star luxury, check out the Hotel Le St. James on the Rue Saint Jacques, which is amongst the city's most prestigious and dates back to 1870.