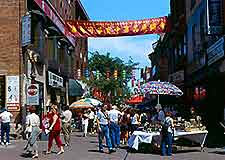 Often known as the 'City of Festivals', Montreal is home to many exciting and varied events throughout the year. Hardly a week goes by in Montreal without some kind of lively festival, cultural exhibition, seasonal sporting event or party.

Montreal has four main newspapers, which are published each day, with 'The Gazette' being the only one in English. This newspaper is often a useful resource for Montreal's latest festivals and events listings, together with weekly cultural magazines available around the city and at tourist information outlets.