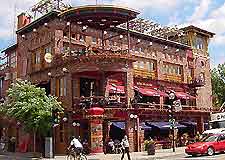 Restaurants are spread throughout the city of Montreal and are clustered around a number of prominent areas, including the downtown district. However, many of the best restaurants stand outside of downtown Montreal, so don't be afraid to venture outside of this region and visit areas such as Montreal's Little Italy and lively Chinatown districts. 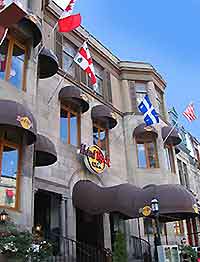 Most restaurants in the Montreal area tend to conform to general opening hours typical of Canada and North America. Those restaurants and cafés opening for breakfast do so from 06:00 onwards, with coffee shops opening between 09:00 to 10:00. Most lunchtime dining venues in central Montreal open their doors at around 10:00 or 11:00, often closing mid-afternoon. Evening dinner is generally served between 19:00 to 22:30, although at the weekend, many restaurants in Montreal stay open much later.

Breakfast in Montreal is a popular meal and many visitors to Montreal choose to eat breakfast at their hotel restaurant, where a buffet choice is often available. However, those looking to eat breakfast away from the convenience to their hotels should try some of Montreal's traditional European-style brunches, which are available at cafés dotted around the city center, including Mont Royal Avenue. 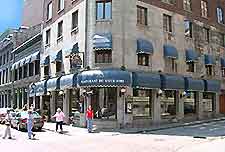 Lunch in Montreal is what you make it and whether you are looking for a picnic lunch on a nearby park bench, or a sit-down lunch in a central restaurant, Montreal has much to offer. Sandwich shops and fast-food restaurants are popular lunchtime choices, together with fresh produce from the bakeries around Montreal's Mile End district. Many lively restaurants can be found along the St. Laurent Boulevard, together with pubs and cafés. Also, the numerous shopping malls around downtown Montreal and in the 'Underground City' often feature vast food courts, which are open throughout the day. Little Italy is the perfect area for tasty Italian dishes, while for more oriental lunchtime cuisine, look no further than Montreal's animated Chinatown, which is full of atmospheric Chinese restaurants.

One of Montreal's most notable dining areas can be found close to the St. Laurent Boulevard, along the nearby St. Denis Street. With a strong European and Parisian flavor, restaurants in this part of Montreal often include seasonal al fresco dining areas. Also, many popular restaurants are located around Mont Royal Avenue and Sherbrooke Street, including seafood, Italian, Spanish, Chinese and French restaurants, together with steakhouses serving traditional North American food. Many hotels in downtown Montreal are home to some exceptional restaurants, which are usually open to non-residents.