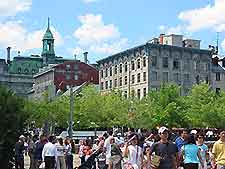 Montreal is home to an enormous selection of shopping malls, department stores and fashion boutiques, which tend to be divided by streets and districts.

Some of the main shopping areas in Montreal are centered around Sainte Catherine Street - which is lined with literally hundreds of shops, around St. Paul Street - along the side streets and at the Marché Bonsecours, St. Laurent Boulevard - featuring an extensive selection of alternative ethnic shops, the Westmount area - with many exclusive areas, and throughout the downtown district - where you will find some of the city's main shops and high-street chains.


One of the most unusual features of the shopping scene is the famous 'Underground City', which is an extensive series of underground tunnels, malls and commercial areas, together with metro stations, hotels, restaurants, movie theaters and businesses. With tunnels spreading around the McGill Metro Station, the Windsor train station and the Place des Arts, the 'Underground City' network offers perfect protection from weather extremes, particularly during harsh winter months.

Generally, shops in Montreal are open between 09:00 to 18:00 from Saturday through Wednesday, and between 09:00 to 21:00 Thursday and Friday. Most shops, department stores and malls also open on Sunday between 12:00 to 17:00, although opening hours can vary, particularly with smaller, independent specialty shops. 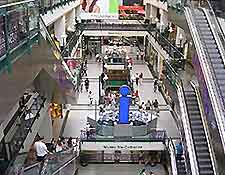 Complexe Desjardins
Address: 4 Complexe Desjardins, Montreal, Quebec (QC), H5B 1E5, Canada
Tel: +1 514 845 4636
Close to the Place des Arts, the Complexe Desjardins stands in downtown and is a large building, housing a number of shops, restaurants, and also a hotel. This complex is also home to many seasonal events, including the annual Montreal Jazz Festival.

Montreal Eaton Center
Address: 705 Sainte Catherine West, Montreal, Quebec (QC), H3B 4G5, Canada
Tel: +1 514 288 3708
The Eaton Center is one of the city's main shopping areas, containing over 150 shops and around 30 restaurants, including a vast selection of designer outlets and fashion boutiques, such as The Gap and Benetton. A six-screen cinema is also available at the Eaton.

Maison Simons
Address: 977 Sainte Catherine Street West, Mansfield, Montreal, Quebec (QC), H3B 4W3, Canada
Tel: +1 514 282 1840
Located in the heart of the city center, Maison Simons is a major department store, with three floors and a vast array of merchandise. The shop itself dates back to the 1840s.