Getting Around, Winnipeg Travel, Transport and Car Rental 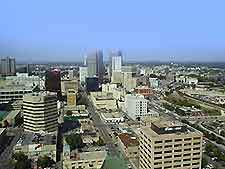 Although Winnipeg's downtown core is fairly compact, with many of the main sights being within easy walking distance of each other, Winnipeg offers a range of public travel and transport options. Operated by Winnipeg Transit, public bus transport in Winnipeg is popular with both locals and visitors, connecting the city with nearby Winnipeg International Airport.

Other methods of public transport include Greyhound long-distance coach travel, car rental, taxi cabs and also VIA trains, which travel from Winnipeg to many major cities in Canada. 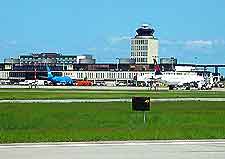 Winnipeg International Airport stands around 4 miles / 7 km to the northwest of the city. Many major airlines operate at this transport hub, including Bearskin Airlines, Northwest Airlines, WestJet Airlines and Air Canada, with regular flights to major cities in Canada and the United States. Serving around three million passengers each year, Winnipeg Airport features a selection of ground transport, including taxis and the Sargent No. 15 city buses, which provide a reliable and inexpensive way to travel into the city. 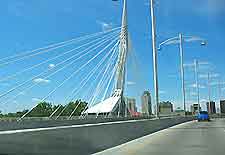 For car rental in central Winnipeg, head to Pembina Highway, where a reasonable deal at 'Executive' can be arranged. A number of car rental transport chains can also be found at Winnipeg Airport, including Avis, Budget, Dollar Thrifty, Hertz and National Car Rental. Several major highways are located around Winnipeg and include the:


Driving is the perfect way to travel around the Winnipeg area and explore the surrounding towns. A large, multi-story parking lot on Edmonton Street is situated close to St. Mary Avenue, in downtown Winnipeg. In Canada you always drive on the right-hand side of the road, and wearing a seatbelt is required by law.

Tel: +1 204 986 5700
Winnipeg Mall Center Bus Depot is located along Portage Avenue and is open from 06:30 to midnight. City bus transport is inexpensive and buses always require exact change for fares. Operated by Winnipeg Transit, public buses travel between Vaughan Street and the airport, and throughout the city, operating Monday to Saturday from 06:00 to 22:00, and on Sunday between 06:30 and 22:00. Greyhound transport operates a number of short-distance and long-distance buses, which travel further afield, to locations such as Brandon, Regina, Thompson, Thunder Bay and the Riding Mountain National Park.

Tel: +1 800 561 8630
Union Station is Winnipeg's train station and is located along Main Street, to the south of Portage Avenue. Regular VIA trains travel to and from Winnipeg station, to Churchill, Saskatoon, Toronto and Vancouver. Train fares feature large discounts when booked at least five days in advance.

A number of taxi and limo transport companies operate in the city of Winnipeg and provide a particularly convenient method of transportation. Taxis also provide a reasonably priced way to travel to and from Winnipeg International Airport.