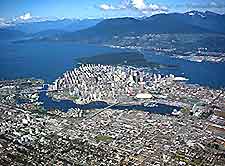 Lying between snowy mountainous scenery and the ocean, Vancouver is one of the most attractive cities in Canada. Vancouver is situated on the southwestern side of British Columbia (BC) and is a busy city, with many stylish skyscrapers clustered around Vancouver's downtown district. The city of Vancouver is home to an array large areas of green and Vancouver's Stanley Park is the most impressive, being simply vast and similar in size to the downtown Vancouver business region.

Vancouver is a sophisticated and truly cosmopolitan city, being the third-biggest in the whole of Canada. The port in Vancouver is amongst the most busy on the western coast and is based around the attractive Burrard Inlet harbor area. Vancouver features a number of peninsulas, with several nearby islands around the Strait of Georgia. Greater Vancouver stands to the south of the scenic Fraser River and its coastline features many popular beaches.

Where to stay on Vancouver depends very much on your travel plans, with hotels located throughout the city and plentiful accommodation around Vancouver's outskirts. In the heart of downtown Vancouver you will find a cluster of arguably the city's best accommoadtion offerings, being conveniently close to top restaurants, shopping centers and entertainment. Hotels along the scenic waterfront are also particularly desirable in the Vancouver area, with popular alternatives including the North Shore region, False Creek, Westside, downtown Vancouver's West End region, and around the nearby Vancouver International Airport (YVR), which lies to the south of the city. More information about Vancouver Hotels.

The tourism industry in Vancouver is providing an important part of the city's economy and many local hotels and companies actively target Vancouver's tourism trade. The main tourist information outlet in the city is Vancouver's popular Tourist Info Center along Burrard Street, which is open daily during the summer months and Monday through Saturday the rest of the year. Here you will find a large choice of information about the main tourist attractions in Vancouver, with helpful staff assisting with inquiries about accommodation, dining, tours and activities. The Vancouver Tourist Info Center also stocks the official visitors guide, 'The Vancouver Book', which is available free of charge. 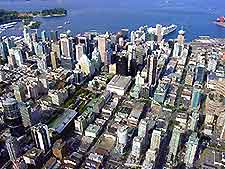 Vancouver's main tourist attractions include the Vancouver Aquarium - containing more than 20,000 different animals and must-see marine life, including Beluga whales and dolphins; Vancouver's Christ Church Cathedral - a grand and historical building, dating back to the late 19th century, with imposing architecture contrasting with nearby modern high rise structures; Playland - a popular amusement park known for its wooden roller coaster and fast rides; and Storyeum - situated in a large underground theater in the Gastown district of Vancouver, with multimedia attractions, dinosaur skeletons, prehistoric information and many other dinosaur-related exhibits. More information about Vancouver Tourist Attractions.

Some of Vancouver's top museums and art galleries include Vancouver Museum - a major natural history museum featuring an enormous collection of exhibits and information, displayed in categorized sections; the Telus World of Science - with an instantly recognizable futuristic dome, hands-on displays, educational exhibits and information, and a large OMNIMAX theater with regular shows; Vancouver's Museum of Anthropology - housing many impressive artifacts and finds from the Northwest Coast; and the Vancouver Art Gallery - the city's premier collection of art works, with paintings and sculptures by many well-known artists, together with seasonal exhibitions and events. More information about Vancouver Museums and Art Galleries.