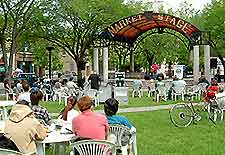 Winnipeg has much to offer in terms of seasonal events, local festivals and recreational activities, many of which are held at the Winnipeg Convention Center. One of the highlights during Winnipeg's calendar of events is Canada Day on July 1st, a national holiday, which is celebrated throughout the city, long into the night.

Family New Year's Eve at The Forks - December 31st, featuring a range of winter sports, including tobogganing and ice skating, together with seasonal festivities and fireworks at midnight