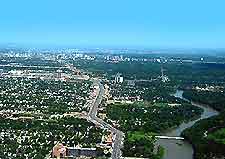 Winnipeg is a large and spreading city, with many notable districts and local multiethnic communities. Main Street in central Winnipeg is the principal north / south roadway around which much of the city is easy to reach. Nearby, Portage Avenue is Winnipeg's main southeast / northeast thoroughfare, leading towards Winnipeg International Airport.

Downtown Winnipeg is one of the city's most lively and important districts, where many of the city's tallest skyscrapers can be found. To the northeast of Winnipeg's downtown area, the historical Exchange District is worthy of a visit and contains many old buildings of significant interest. Here are Winnipeg's main districts, neighborhoods and locations. 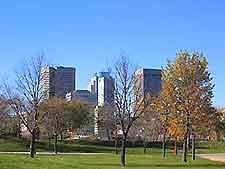 Home to many of the city's most notable landmark high-rise buildings and skyscrapers, downtown Winnipeg lies around the city's Main Street and Portage Avenue areas, spreading out along Memorial Boulevard and Broadway. Winnipeg's downtown district is an important commercial area and contains around 15,000 residents, many top restaurants and a plethora of shopping opportunities, particularly along Portage Avenue and around Winnipeg Square. Much of historic downtown Winnipeg has been well preserved and the city is constantly renovating and restoring many examples of early architecture in this area. 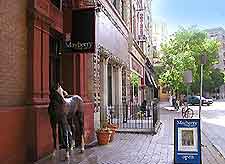 An important reminder of Winnipeg's origins, the Exchange District is an extremely historical area of the city and is full of early 20th-century buildings and revamped warehouses. Containing the first major commerce area in Winnipeg, highlights here include Old Market Square, the Manitoba Arts Council, Artspace, the campus of Red River College and the seasonal Winnipeg Fringe Festival, the second biggest festival in the whole of Canada. 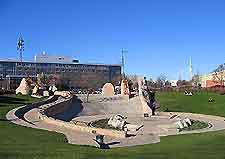 Known locally as simply 'The Forks', Winnipeg's Forks Market district is a popular spot where visitors to the city choose to congregate. An important national historic site, Forks Market is close to the CanWest Global Baseball Park. With many superb restaurants often offering al fresco dining during the summer months, the Fort Mark area of Winnipeg contains the Manitoba Theater for Young People, the Explore Manitoba Center, Manitoba Children's Museum, the Assiniboine River Walk, and superb views of the historic port. The Fork Mark's district can be found at the confluence of the Assiniboine and Red Rivers.

Standing on the eastern side of Winnipeg, the Transcona district is an old area, now classified as an actual city. Just a short drive from downtown Winnipeg, Transcona is a popular excursion and features a number of museums, casinos, shopping centers and family theme parks, such as the Fun Mountain Waterslide Park and the Tinkertown Family Fun Park. Transcona is often abbreviated by locals to simply 'TC'. 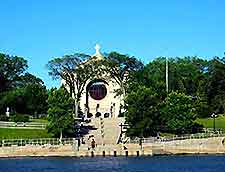 Old Saint Boniface lies across the Red River and is home to a large and important French-speaking local community. Known in Winnipeg as 'Old Saint B', the district includes many historical buildings and attractions, such as the Saint Boniface Basilica and the popular Center Cultural Franco Manitobaine arts venue.

The city's North West district is situated on the northern side of Winnipeg International Airport and features many popular attractions. Worth a visit here is the Western Canada Aviation Museum and the Oak Hammock Marsh Interpretive Center, together with many nearby lakes and beach areas.

Including the St. James and Assiniboia neighborhoods, this district stands on the western outskirts of Winnipeg and contains the Winnipeg Arena and Bomber Stadium, which hosts many popular football games, attracting large crowds. Other places worth a visit in this large district include Polo Park, Assiniboine Park Zoo and the Air Force Heritage Park and Museum.

Perhaps the most famous attraction in south Winnipeg is the area along Corydon Avenue, which is affectionately known as the city's 'Little Italy'. Worthy of a visit, in this district are a number of authentic Italian restaurants, which often feature outdoor dining areas during the warm summer months. The Provincial Heritage Park is also close to Winnipeg's South district, together with several large parks, forts and recreational areas.

The South West district of Winnipeg offers a number of extensive parklands alongside the banks of the Red River. This district also contains a selection of impressive shopping malls, such as the St. Vital Center. One of the most popular attractions in South West Winnipeg is the Royal Canadian Mint, where all of the country's coins used as currency are produced.

North Winnipeg is home to many impressive architectural wonders, such as the Holy Trinity Ukrainian Orthodox Cathedral, which is one of the district's most eye-catching landmarks. Nearby, Kildonan Park is a popular recreational area, filled with seasonal outdoor activities, which include a summer swimming pool and ice skating during the winter.

Situated on the northeastern corner of Winnipeg's downtown area, the Waterfront district is a particularly scenic and desirable area and can be found along the western banks of the city's Red River. Home to a number of popular condos and hotels, Winnipeg's Waterfront district is an up-and-coming part of the city, with many future developments planned.