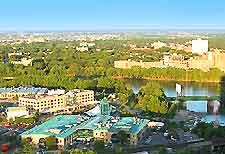 Few people associate the city of Winnipeg with glorious, sun-drenched sandy beach attractions, yet a number of stunning beaches lie just a short distance from Winnipeg, lining the eastern shoreline of nearby Lake Winnipeg. Grand Beach is one of Lake Winnipeg's premier attractions during the summer months, together with nearby Patricia Beach.

Other popular attractions within easy reach of Winnipeg include the notable nature haven of Oak Hammock Marsh, the scenic and heavily forested Birds Hill Provincial Park, the historic town of Dugald, the restored stone walls of Lower Fort Garry, and the city of Selkirk, with top attractions here including fishing and the Marine Museum of Manitoba.

Address: Park Road, off Highway 59, Manitoba (MB), Canada
Tel: +1 204 222 9151
Standing around 15 miles / 24 km from downtown Winnipeg, the Birds Hill Provincial Park is home to many miles of walking trails, a small beach and forested areas. With a large concentration of local flora and fauna, including wild turkeys amongst other animals, attractions here are seasonal, with cross-country skiing being particularly popular during the winter. 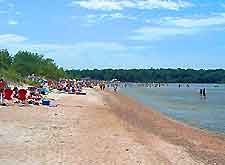 Address: Eastern side of Lake Winnipeg, Manitoba (MB), Canada
One of the many beaches, which line the eastern coast of Lake Winnipeg, Grand Beach is a major attraction during the summer months. With endless stretches of white sand and high dunes, Grand Beach is close to the Provincial Park and Campground, and the Northwind Cabins along Grand Beach Road. Nearby Patricia Beach is slightly closer to the city of Winnipeg and is also worth a visit.

Address: Route 15, East of Winnipeg, Manitoba (MB), Canada
Tel: +1 204 853 2166
The small town of the Dugald lies just over 12 miles / 20 km to the east of Winnipeg and has a population of less than 1,000 people. One of the most popular attractions here is the exceptional Costume Museum of Canada, which is home to around 35,000 items, including many period garments and accessories. A small café area and gift shop are also available onsite.
Open hours: museum, January to December, Tuesday to Friday (year round) - 10:00 to 17:00; May to September, Saturday and Sunday - 12:00 to 17:00
Admission: charge for museum, discounts for children 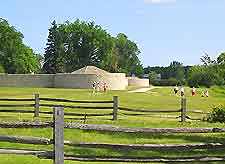 Address: Highway 9, Selkirk, Manitoba (MB), R1A 2A8, Canada
Tel: +1 204 785 6050
A popular excursion, Lower Fort Garry lies around 20 miles / 32 km to the north of Winnipeg, alongside the Red River. This restored fort dates back to the 1830s and has had a number of uses over the years. Lower Fort Garry was originally built by Hudson's Bay Company and was an important part of the 19th-century fur trade. Attractions here include many historical features, workers and guides dressed in period costumes, a restaurant, picnic facilities and audio-visual presentations.
Open hours: May to early September, daily - 09:00 to 17:00
Admission: charge, discounts for children

Address: Queen Avenue and Eveline Street, Selkirk, Manitoba (MB), Canada
Tel: +1 204 482 7761
Past Lower Fort Garry and part way to Lake Winnipeg lies the small city of Selkirk. Famous for its outstanding fishing, many Winnipeg anglers visit Selkirk to catch the large catfish, which are in plentiful supply here. One of Selkirk's most notable attractions, the Marine Museum of Manitoba stands at the entrance of Selkirk Park and is home to six large ships, which include a historical steamboat, together with a gift shop and regular guided tours.
Open hours: museum, January to December, Monday to Friday - 09:00 to 17:00, Saturday - 10:00 to 18:00; May to September, Sunday - 10:00 to 18:00
Admission: charge for museum, discounts for children

Address: Highway 61 and 220, North of Winnipeg, Manitoba (MB), Canada
Tel: +1 204 467 3300
Within easy driving distance of Winnipeg, Oak Hammock Marsh can be found in southern Manitoba and features a number of vast marsh areas. An important nature conserve, the wetlands are the home of many thousands of birds, including huge numbers of waterfowl. Famous for being one of Canada's premier bird sanctuaries, Oak Hammock Marsh features almost 300 species, which can be observed along boardwalks, platforms and special viewing areas.
Open hours: daily, May to August - 10:00 to 20:00; September and October - 08:30 to dusk; November to April - 10:00 to 16:30
Admission: charge, discounts for children