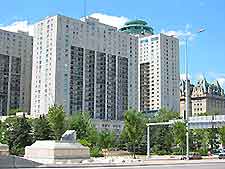 The majority of hotels in Winnipeg are little more than a stroll away from the bus and railway stations, with available accommodation rarely being difficult to find. The most modern hotels resemble towering skyscrapers and dominate the skyline, being favored by businessmen during the week and tourists at the weekend, when lodging rates are usually discounted heavily.

Budget accommodation is widespread in Winnipeg, with some good motels being scattered along the main approach roads, such as the Pembina Highway and Route 42, which forms part of the Trans Canada Highway. A selection of basic hotels line Main Street, although the quality of these is quite poor and most are worth avoiding. For help in finding affordable B&B lodging and available rooms, 'Tourism Winnipeg' is on hand and contains a list of the most reliable and well-placed accommodation in the city. 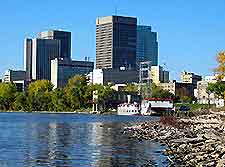 Lodging in the city ranges from historic buildings to more modern high-rise hotels, with impressive central views. Most major chains are well represented in downtown Winnipeg and these include Best Western, Delta, Holiday Inn, Radisson and Sheraton hotels. Travelodges are also available within the downtown district, catering mainly for the budget traveler.

Further accommodation is based close to the Winnipeg International Airport, which stands on the western side of the city, next to Murray Park and near to a number of popular hotel chains, such as Four Points and Radisson. Close by, Portage Avenue is a major artery and contains many notable hotels, being the perfect place to base yourself for shopping and general exploration of Winnipeg.

For those looking for budget hotels and cheap accommodation, bed and breakfasts offer excellent value for money and can be found throughout Winnipeg and the surrounding areas. Often family run, local B&Bs are particularly clustered around the city's outskirts, where you will also find many popular independent hotels. Popular with budget-concious backpackers, the Ivey House International Youth Hostel on Maryland Street is close to the bus station. During the summer months, further budget lodging is provided by the University of Manitoba, where vacant rooms are rented out. 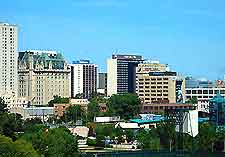 Other inexpensive accommodation options in Winnipeg include nearby camping grounds, suitable for RVs (recreational vehicles), such as the Traveler's RV Resort on Murdock Road, on the eastern side of the city.

More hotels are concentrated around the Transcona area of Winnipeg, which is just a short journey from the downtown district. Forks Market is another popular place to stay, with an array of accommodation close to the CanWest Global Baseball Park, the scenic Assiniboine River Walk and the nearby Historic Port. The up-and-coming waterfront area is rapidly expanding and offers impressive scenery, with hotels in this part of the city being both desirable and expensive. In the Exchange District and close to Winnipeg Square, the Fairmont Hotel on Lombard Place boasts four-star accommodation, stunning city views and a rooftop saltwater swimming pool.