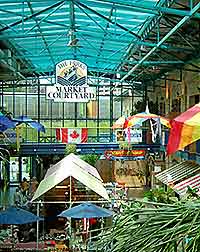 Shopping is one of the many highlights in the Winnipeg area and the city contains a number of notable sizable malls and department stores. For some serious shopping in downtown Winnipeg, be sure to visit Forks Market, which has become an important part of local life, together with nearby Portage Avenue.

For large malls in Winnipeg, head to the St. Vital Center, which contains over 150 different shops, attracting many thousands of shoppers each day. Also, downtown Cityplace is a particularly popular mall, where you will find around 70 different shops, and is well placed for exploration of the city center.

Generally shopping hours in Winnipeg open between 10:00 to 21:00 from Monday through Friday, and between 09:30 to 18:00 each Saturday. The majority of the city's largest shops, department stores and malls are also open on Sundays from 12:00 to 17:00 or slightly later. Opening hours at the city's smallest independent stores may vary. 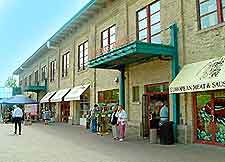 
St. Vital Center
Address: 1225 St. Mary's Road, Winnipeg, Manitoba (MB), R2M 5E5, Canada
Tel: +1 204 257 5646
The St. Vital Center is one of the largest shopping centers in Winnipeg and is home to more than 150 shops, including stores such as Walmart, The Gap and the Disney Store. The St. Vital Center also features a large food court and is just a short drive from the downtown district.

Forks Market
Address: 1 Forks Market Road, Winnipeg, Manitoba (MB), R3C 4L9, Canada
Tel: +1 204 942 6309
Located in the downtown district, Forks Market dates back to the late 1980s and is a popular place to head for bargains. Housed in a number of historical buildings, Forks Market is close to many notable attractions.

Johnston Terminal
Address: 25 Forks Market Road, Winnipeg, Manitoba (MB), R3C 4S8, Canada
Tel: +1 204 956 5593
The Johnston Terminal stands alongside Fort Market and is known for its numerous fashion boutiques and clothing stores, together with a number of restaurants and cafés.

Osborne Village
Address: 103 B Osborne Street, Winnipeg, Manitoba (MB), R3L 1Y4, Canada
To the south of downtown Winnipeg and the Assiniboine River, Osborne Village has long been an affluent and wealthy suburb and one of the city's best shopping districts, known for its Bohemian atmosphere and character.

Portage Avenue Downtown
Address: Portage Avenue, Winnipeg, Manitoba (MB), Canada
A famous location in the city, the corner of Portage Avenue and Main Street offers an underground shopping center, with over 50 shops and a number of nearby hotels. Portage Avenue and the surrounding area is one of the city's most popular shopping districts and has much to offer, including Lombard Street, Lombard Concourse and the shops of Winnipeg Square.

Portage Place
Address: 393 Portage Avenue, Winnipeg, Manitoba (MB), Canada
Tel: +1 204 925 4636
Portage Place stands at the corner of Portage Avenue and Vaughan Street in downtown. Encompassing three blocks, Portage Place is home to more than 150 shops, together with an IMAX theater and some of the city's best restaurants.