Getting Around, Siena Travel, Transport and Car Rental 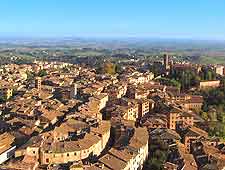 Siena is a small city and the centre is easy to travel around on foot. This is thanks largely to the pedestrianisation of many of its streets, prohibiting access to cars and bicycles. In fact, Siena was the first city in Europe to ban cars as a mode of transport from its historic centre.

It's worth noting that anyone visiting attractions away from the Siena Cathedral and main Il Campo area will encounter a few steep hills on their travels. A car is very useful for travelling further afield into surrounding towns and villages. Public transport, particularly bus services, is also a practical and extremely affordable option.

Siena has a very small airport with few flights, so most international visitors therefore arrive at Rome or Milan, and then connect to airports at either Pisa or Florence. Pisa International Airport 'Galileo Galilei' (PSA) is the biggest in Tuscany and operates flights from major Italian destinations, and some European cities. Regular train services provide a quick way to travel between Pisa and Siena, with this journey taking approximately two hours. Alternatively, visitors can choose to arrive at nearby Florence Airport 'Amerigo Vespucci' (FLR), which links with all major Italian airports, as well as 13 European destinations. Direct coach transport operates between Florence Airport and Siena. It is also possible to take a train from Florence S.M. Novella station and travel into Siena. 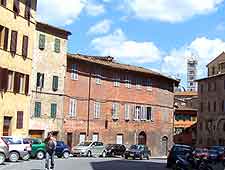 An extensive main road and motorway network makes it very easy to travel into Siena, whether you are coming from the direction of Rome, Milan, Bologna, Florence, Venice, Genoa or Pisa. As well as car rentals, it is also possible to hire a Vespa for that authentic Italian city experience. Car parking in Siena is only available outside of the main city walls. 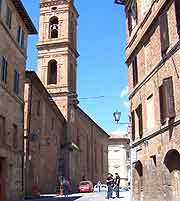 Several small buses, known as Pollicino, offer limited public transport within Siena's central streets. They operate at 30-minute intervals and are a good way to travel into central Siena, if you have parked outside of the city walls. The main bus station for routes outside the city is on the Piazza Gramsci.

The train station is situated just outside of Siena city centre, on the Piazza Fratelli Roselli. As Siena is on a branch line, services to Pisa run via Empoli, whilst those choosing to travel to Rome by rail will find that it is necessary to change at Chiusi. Other rail services link Siena with towns and cities within the Tuscan region.

Siena's main taxi ranks are on Piazza Matteotti and outside the train station. It's worth noting that cabs can only pick up passengers at established taxi stands. Alternatively, taxi transport can be booked in advance by telephone.