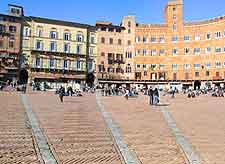 Siena is a great place to eat out, with a varied and lively dining scene.

There are lots of restaurants and affordable eateries, ranging from cosy family-run trattorias to more formal dining venues. Tuscan cuisine features on most menus in Siena.

For those on a tight budget or sightseers with a busy itinerary, Siena also offers plenty of opportunities to stop for a quick snack or light meal. 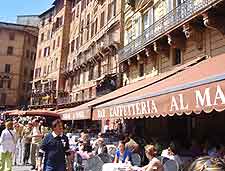 Eating out in is an important part of Italian life. Restaurants tend to offer an extensive choice on their menus, starting with an appetizer and followed by two main courses, side dishes and dessert.

Most people have lunch at around 12:30, although in the summer, lunchtime may not start until 13:00. In the evening, dinner is served from 19:30, although again in the summertime, restaurants and dining venues may start to fill up a little later. Between lunch and dinner, it's usual for restaurants to close. Those located close to Siena's main tourist attractions may stay open during the afternoon. Nearly all shops in Italy are closed in the afternoon for three or four hours, so if you intend to buy a picnic lunch it's best to do so in the morning. 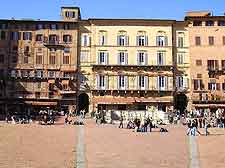 Siena is associated with a number of traditional sweets, cakes and biscuits. Best-known of these is panforte, made with honey, hazelnuts, almonds and spices. Also popular are almond-paste biscuits known as ricciarelli. Castagnaccio are available during the autumn and winter and are made from a batter of chestnut flour covered in pine nuts and rosemary.

Cereals, pulses, herbs, game and pork appear in many traditional savoury dishes. Cold cuts of meat are also fairly typical in the Siena area and offered at some restaurants and eateries. Popular examples include soppressata, finocchiona and capocolli. Cacio pecorino and marzolino are both locally produced cheeses. Extra-virgin olive oil is produced in the hills around Siena and its distinctive taste is apparent in most local dishes.

Breakfasts and light snacks are available in many of Siena's bars. These include morning coffee and pastries, as well as rolls and sandwiches. They are usually inexpensive. It's also possible to find take-out pizza shops.

For visitors to Siena who favour dining out, but have a rather limited budget, one option is to head to an 'osteria'. This is generally a small, informal type of restaurant that serves good-value, basic meals. Family-run trattorias offer a similar sort of dining experience, but are usually a little more expensive. One thing that they all have in common is a menu that includes local specialities, such as homemade pasta. Vegetarian diners usually have a reasonable choice.

There are plenty of formal restaurants and similar dining options in Siena. These include Al Marsili, one of Siena's most upmarket dining venues. Traditional Sienese dishes feature alongside more creative dishes on the restaurant's menu.