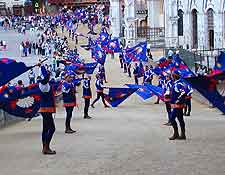 The Italian city of Siena is undoubtedly best known for Il Palio, two spectacular horse races which are held during the summer, amidst much pageantry. During the rest of the year, though, Siena plays host to many other popular traditional festivals, along with sporting events and seasonal things to do, see and enjoy.

To find out information about events taking place in Siena, including music concerts and annual festivals, visitors should look out for posters displayed at various locations through the city. In particular, these can be found around Piazza del Marcato.