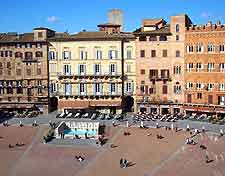 Siena is fortunate in having a large number of well-preserved monuments and historical landmarks, many of which date back to the medieval era. As well as grand piazzas, such as the magnificent Piazza del Campo, Siena also has an abundance of small squares tucked away down its narrow streets and alleys.

Visitors cannot fail to be delighted by Siena's major landmarks, including its grand palaces, medieval buildings and impressive churches. Together, they make up what the city's extremely distinctive cityscape. 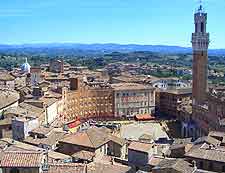 The Piazza del Campo, or Il Campo as it's more popularly known, is Siena's main square and the focal point for local inhabitants and visitors to the city. Il Campo is also the setting for Siena's dramatic Palio horse race, which takes place twice a year. This landmark square dates back hundreds of years, to a time when it was the site of a market place. Its distinctive paving was added in the 14th century. Visitors should take some time to admire the Fonte Gaia, a fountain that is both beautiful and unique.
Open hours: daily
Admission: free 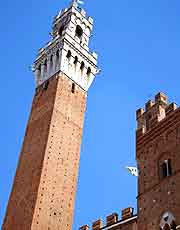 Address: Viale Vittorio Veneto, Siena, Italy, IT
La Fortezza is a formidable-looking building in the north of Siena. This landmark was built during the 16th century by Cosimo de' Medici, in an attempt to stop Siena securing independence. Today, the fortress's underground passages serve as a centre for Enoteca Italian, an organisation that is devoted to showcasing Italian wines. The fortress also offers occasional open-air performances and workshops run by the Siena Jazz Association.
Open hours: daily
Admission: free 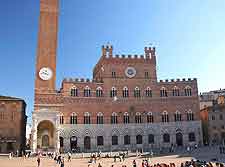 Address: Piazza del Campo, 1, Siena, Italy, IT
Tel: +39 0577 292 263
Overlooking the Piazza del Campo is the 13th-century Palazzo Pubblico. Designed as a public building in the 13th century, this fine Gothic-style landmark still serves Siena today as the city's town hall. Parts of the interior are open to the public. The Civic Museum is also housed within the Palazzo.
Open hours: daily
Admission: free 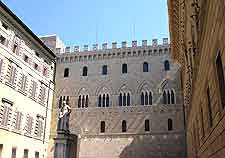 Address: Via Bianchi di Sopra, Siena, Italy, IT
Smaller than Il Campo, but nevertheless an important part of Sienese life is Piazza Salimbeni. This relatively small square has a statue at its centre and three significant buildings around its edge. These landmarks include the Palazzo Salimbeni, which is now the headquarters of the Sienese bank, the Monte dei Paschi di Siena.
Open hours: daily
Admission: free

Address: Via di Fontebrande, Siena, Italy, IT
Siena's Branda Fountain is thought to date from the 12th century. This was a time when fountains were particularly important to fortified towns like Siena, when a good supply of drinking water helped the city in its battles.
Open hours: daily
Admission: free