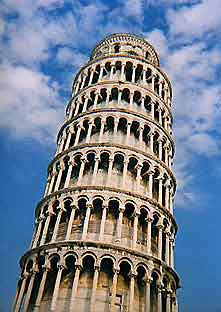 Pisa, located in western Tuscany, is known throughout the world for its famous Leaning Tower, but there is so much more to Pisa than just this striking landmark. This ecclesiastical city began its life as a seaside settlement around 3,000 years ago and was first laid out in the mid-eleventh century.

Today, Pisa is crammed full of wonderful, historical monuments and buildings dating back many hundreds of years, and much of the city has managed to retain its medieval appearance. Pisa is also known for its excellent university, which was established in 1343 and has become one of Italy's top schools.

In the north-west of Pisa there is an immense green lawn on which four impressive buildings stand, in gleaming white marble. These imposing structures are the enormous, breathtaking Duomo (cathedral) - built almost 1,000 years ago, the cathedral's bell tower - better known as the Leaning Tower of Pisa, the circular Battistero (Baptistery) - the largest of its kind in the whole of Italy, and the Camposanto - also known as the Holy Field, without doubt one of the most beautiful cemeteries in the world. This area is referred to as the Campo dei Miracoli or the Piazza dei Miracoli (Field of Miracles) and these remarkable Tuscan buildings combine Moorish, Gothic and Romanesque architectural features. The Piazza dei Miracoli is where you will find Pisa's main tourist information, while additional tourism outlets are located on the Piazza Vittorio Emanuele, and at the nearby Galileo Galilei Airport.

Surrounding the Pisa Camposanto on two sides is the city wall, while two major museums are located to the south. These are the Museo dell'Opera - containing a significant collection of sculptures, paintings and other works relating to the ecclesiastical buildings on the Piazza del Duomo; and the Museo delle Sinopie, with many original sketches in plaster from Camposanto frescoes that were damaged by fire in 1944. 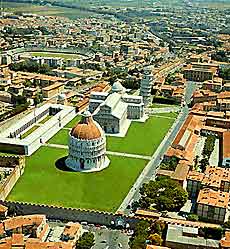 The Leaning Tower of Pisa isn't the only edifice that is no longer standing upright in the city. Unsteady, sandy soil beneath the Field of Miracles has resulted in other problems that initially are not quite so obvious. The baptistery lurches noticeably towards the north and also, when viewed at certain angles, the Duomo cathedral is far from straight. There are even a couple of small bell towers (campaniles) in Pisa that have also shifted and these have been nicknamed 'The Other Leaning Towers!' More information about Pisa Tourist Attractions.

The historic city centre of Pisa is concentrated on the north bank of the River Arno and is still surrounded by 12th-century walls. The 'high street' is the long and curving Via Santa Maria, and connects the Campo dei Miracoli with the Lungarno (Embankment). Palaces and mansions still line this street and retain their splendid facades, which date back to the 16th century. The social centre of Pisa is the Piazza Garibaldi, which is located on the north side of the Ponte di Mezzo (Middle Bridge). Also of note is the elegant Borgo Stretto, which is filled with interesting shops and cafés. If you have time for excursions outside of Pisa, then consider trips to the neighbouring Tuscan cities of Florence and Lucca.