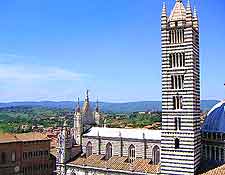 A particularly enchanting city bounding with Gothic architecture and Tuscan cuisine, Siena is home to an impressive medieval centre, which is filled with eye-catching buildings. However, due to increasing demand, accommodation in Siena is often extremely hard to find during the summer months and this is especially so during the Il Palio festival.

The Piazza del Campo is the main public square in Siena, next to the Palazzo Communale, along with a plethora of churches, museums and pavement cafes. Siena is the perfect base for those wishing to explore central Tuscany and its tourism office on the Piazza del Campo provides information about excursions and most nearby tourist attractions. 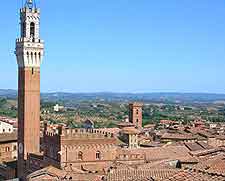 Filled with medieval architecture and many fine buildings, one of the main tourist attractions in Siena is the city's glorious Duomo cathedral, the Cathedrale di Santa Maria.

However, this is just one of the city's numerous historical gems, with others including the ancient Battistero di San Giovanni, the rather opulent Palazzo del Magnifico, and the Oratorio di San Bernardino, situated alongside the Church of San Francesco. More information about Siena Tourist Attractions. 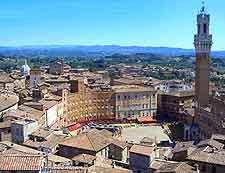 Many breathtaking landmarks in Siena surround its main public squares, such as the Piazza del Campo, and to a lesser extent, the Piazza Salimbeni. The Piazza del Campo is where the city's famous Palio horse race is staged twice yearly and was paved as long ago as the 14th century. Something else for tourists to look out for in Siena is the Torre del Mangia, a particularly striking tower which is now widely associated with the city and the second-tallest of its kind in the whole of Italy. More information about Siena Landmarks. 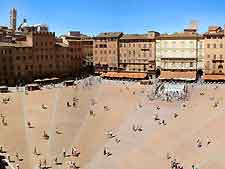 A number of themed museums present themselves to tourists wishing to find out more information about a range of subject matters. Always popular are the museums of archaeology and paleontology, the latter of which is filled with dinosaur fossils. The natural history exhibits at the Museo Zoologico are also popular in Siena, as are the spectacular art works and Italian masterpieces displayed within the Museo dell'Opera Metropolitana on the Piazza del Duomo. More information about Siena Museums and Siena Art Galleries. 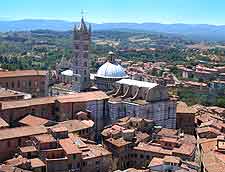 Tuscany is a truly wondrous region of Italy to explore and even Florence is relatively close by, lying at just over one hours' drive to the north.

Also worth checking out are the Brunello vineyards and olive groves within the hilltop town of Montalcino, the medieval centre in the village of Raddà, and the towers at San Gimignano, of which there are no less than 13 remaining, although historically there were once more than 70 in total. More information about Siena Attractions Nearby.