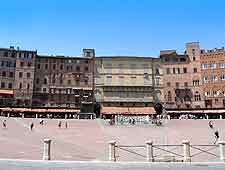 The historic centre of Siena is encircled by its medieval walls and divided into a number of districts. These walls are broken by a series of gates through which visitors can enter the city of Siena, including Porto San Marco, Port Tufi, Porta Romana, Porta Pispini, Porta Ovile, Porta Camollia, Porta Fontebranda and Porta Laterina.

Visitors to Siena's famous Il Palio horse races will discover that the city is traditionally divided into 17 distinct 'contrade' or neighbourhoods. However, the best way to navigate around Siena is to remember that the city is split into three distinct districts known as Terzi, or Thirds. 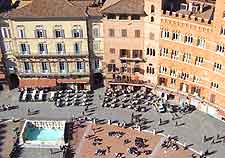 The Terzo di San Martino is so named because of its position on the route taken by medieval pilgrims on the way to Rome. San Martino's main square, Il Campo, also happens to lie at the heart of Sienese life today.

Many of Siena's most popular tourist attractions are located on or around Il Campo, including the Torre del Mangia, Fonte Gaia and City Hall. 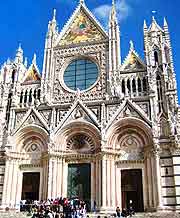 A short distance to the east of Il Campo, is the City District of Sienna. This neighbourhood is home to the Duomo, as well as the city's acclaimed National Art Gallery, the Pinacoteca Nazionale. The main streets of Terzo di Città begin in the Piazza Postierla, which is known locally as the 'Four Corners'.

Siena's northern quarter spreads off either side of the city's most fashionable shopping street, Via Bianchi di Sopra. Siena's oldest Gothic palace, the Palazzo Tolomei, can be found in this neighbourhood, as can the imposing La Forteza and the Basilica di San Francesco.