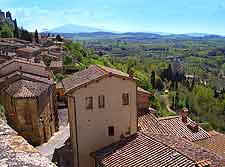 Whilst there's plenty to interest visitors within Siena itself, no visit to Tuscany would be complete without a foray into the surrounding countryside and its endless attractions. From Siena, there are some great days out to be enjoyed, whether you decide to get out and about by car or use public transport to reach the neighbouring attractions.

Near to Siena are idyllic hilltop towns and villages, along with vine-covered slopes, where beautiful scenery abounds. So too do attractions, which come in many guises and include palaces, churches and museums. 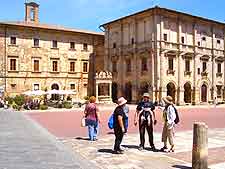 The nearby village of Montepulciano is the perfect place to while away an afternoon. Much of its medieval character has been retained.

One of the village's most popular attractions is San Bagio, a wonderful Renaissance church, full of character. 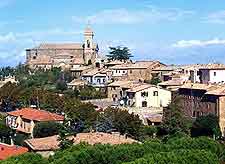 Just 44 km / 27 miles from Siena is the small hilltop town of Montalcino. Its walled medieval town centre is one of its many attractions.

The town is also known for its olive groves and the famous Brunello vineyards. Art lovers should head to Montalcino's Civic Museum which houses an important collection of Sienese paintings. 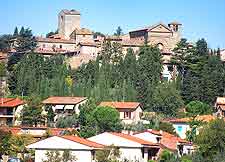 Raddà is around 30 km / 19 miles from Siena. Situated on a hill and surrounded by woods and vineyards, this is an idyllic spot for a daytrip. The medieval centre of this beautiful village has been well preserved and has some interesting buildings and attractions, including the Palazzo Pretorio. Perhaps of greater interest for wine lovers, though, is the fact that the village of Raddà is home to the Chianti Classico consortium, together with a library and archive dedicated to the history of Chianti.

For a day out with a difference, head to Le Crete, an area that is south of Siena and which resembles a 'lunar' desert with its barren hilltops. This remote and unique area has, unsurprisingly, inspired artists and writers through the ages. If you like stunning sunsets, then a visit to Le Crete during the evening is unmissable. 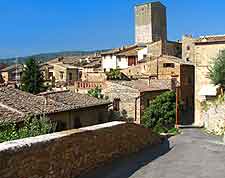 There is no mistaking the skyline of nearby San Gimignano, some 42 km / 26 miles from Siena. Some 13 towers stand proud above the streets of this unusual Tuscan town, amongst other historic attractions.

Originally there were 76 towers, all built by rival families vying to outdo each other in displaying their wealth and power. 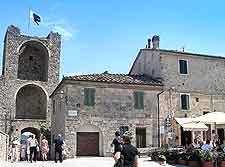 Just 15 km / 9 miles from Siena, Monteriggioni is another fine example of a hill town in this region. It is particularly noteworthy for its fortification wall, which has, to this day, remained virtually intact. Built in the 13th century, the wall was intended to keep out attacking Florentine soldiers.