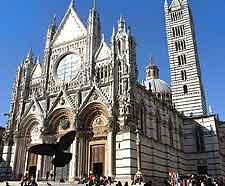 According to legend, Siena was founded by the son of Remus. Today, you don't have to look far in the city's streets to find plenty of reminders of this ancient story, which has its links with the origins of another Italian city, Rome.

Much of the evidence in history points to Siena growing up as an Etruscan settlement. Later, it became a Roman town known as Sena Julia. By the 5th century, it had its own bishop.

During the early Middle Ages, Sienna maintained its position as an important city. It enjoyed economic success, something that was to lead to lively competition between Sienna and other cities in the region, such as Florence.


In the 12th century, there was also a degree of local infighting. Siena was self-governed by consuls, and as urban control increased, enmity between the commune and the local nobility became more and more bitter. This was particularly the case with the rivalry that took place between the Guelphs and the Ghibellines. In the end, Siena came out in favour of the Ghibellines, thus siding the city with the Holy Roman Empire rather than the papacy.

Despite such political instability at this time in its history, this was still a period of great expansion in the city. When the 13th century arrived, banking began to play an important role in the city's economy. Plans to build opulent buildings, such as the gothic-styled Duomo, were put into operation. Then, in the early 13th century, Siena founded a university.

Furthermore, from the 13th century onwards, Siena's reputation as a centre for the arts grew. The city's famous 'Il Palio' horse race has its origins in the Middle Ages. It is not known exactly when the very first event took place, although the earliest public race was probably held in the 1300s.

In 1348, the city was struck by plague. The Black Death was particularly virulent and it left Siena and its population in a more vulnerable state than ever. It also meant that the city never again came to rival nearby Florence in terms of wealth or economic success. 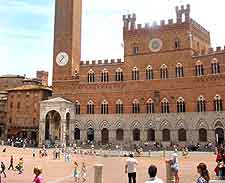 History from the 16th Century to Modern Times

In the centuries that followed, Siena changed hands fairly frequently. Its rulers included the Visconti family, Charles V and the Medici family. Cosimo I de'Medici introduced strict anti-banking laws into the city, which did little to help its economy. Eventually, in 1861, Siena became part of the Grand Duchy of Tuscany, within a unified Italian state.

In 1966, Siena took the unusual step of pedestrianising its city centre. This allowed tourists and locals the opportunity to sightsee and shop in comfort. Today, the city is still a popular tourist destination. Many people come to witness the spectacle of the modern-day Palio race. Siena also continues to operate as an important financial centre in Tuscany.