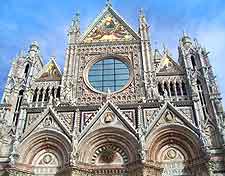 Siena is a delightful city to explore, with its many magnificent palaces, fine religious buildings, medieval architecture and a range of other appealing tourist attractions. Indeed, Siena boasts so many different tourist attractions that there's plenty to keep visitors entertained over several days.

It really is worth just spending a little time wandering through its maze of streets to discover Siena in all its glory. Tourists should be aware that a system of combined tickets operates for many of the city's top attractions and main sights. 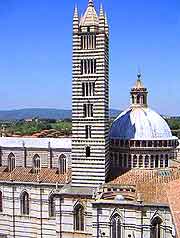 Address: Piazza Duomo, Siena, Italy, IT
Tel: +39 0577 283 048
Siena's Cathedrale di Santa Maria, or Duomo as it's more popularly known, is a real treasure trove of Tuscan art. The 13th-century building on the site was designed by the famous Gothic architect, Pisano. A century later, work was started to make Siena's cathedral as magnificent as St Peter's in Rome. However, the arrival of the plague in Siena in 1348 put a stop to the work. Today, tourists can see the walls of the uncompleted project, together with the original building and its many attractions. Visitors should look out for the distinctive exterior, the black-and-white tiled bell tower, some fine mosaics and an interesting crypt. The cathedral also houses the Museo dell'Opera Metropolitana.
Open hours: daily, March to May - 10:30 to 19:30; June to August - 10:30 to 20:00; September to October - 10:30 to 19:30; November to February - 10:30 to 18:00
Admission: charge 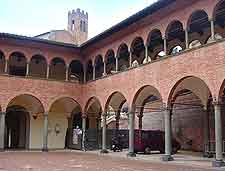 Address: Costa di San Antonio 6, Siena, Italy, IT
Tel: +39 0577 247 393
Caterina Benincasa became a nun in 1355, at the age of just eight. After receiving the stigmata, she gained a reputation for devout wisdom. Finally, in 1939 she was declared patron saint of Italy. The house of her birth became a sanctuary following her death. Today, the Casa di Santa Caterina remains a place of peace and repose. Beyond a small courtyard are stairs, which lead to Catherine's cell. Other attractions include an oratory, as well as a church on the same site.
Open hours: daily - 09:00 to 12:30 and 15:00 to 18:00
Admission: free 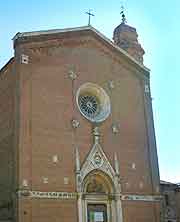 Address: Piazza San Franceso 18, Siena, Italy, IT
Tel: +39 0577 283 048
Built at the place where San Bernardini of Siena was said to have preached his first sermon, this oratory is located next to the Church of San Francesco. Visitors to the Oratorio di San Bernardino can expect to see some very fine frescoes dating from the 16th century.
Open hours: daily - 10:30 to 13:30 and 15:00 to 17:30
Admission: charge

Address: Piazza San Giovanni, Siena, Italy, IT
This opulent palace was built for Pandolfo Petrucci, who ruled over Siena in the 16th century. He acquired the reputation of being something of a tyrant and eventually became one of the most powerful men in Italy. Today, the Palazzo del Magnifico stands as a fine example of grand Renaissance architecture and is an attraction that's well worth including on any tour of Siena.
Open hours: daily
Admission: charge

Address: Piazza San Giovanni, Siena, Italy, IT
This ancient baptistery is another of Siena's historical gems. Located behind the cathedral, it comprises three naves and some colourful frescoes. The centrepiece of the Battistero di San Giovanni is a font that may be attributed to Donatello and Ghiberti.
Open hours: daily, March to October - 09:30 to 19:00; November to February - 09:30 to 18:00
Admission: charge