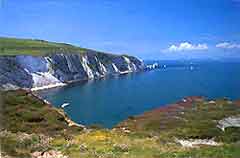 Many families choose to holiday on the Isle of Wight solely to spend time on the plentiful beaches, although there are plenty more attractions worth considering, some of which are rather weather dependent. You may like to consider touring the island onboard a traditional open-top double decker bus, or choose to sail around the coastline. If you really fancy splashing out, then a pleasure flight is another option.

A trip to either the Adgestone or Rosemary vineyards may appeal, while children will enjoy spending time at the Amazon World Zoo Park at Newchurch, which lies between Sandown and Newport, and boasts a large number of exotic creatures, including Britain's biggest collection of toucans. Further attractions on the Isle of Wight include a heritage steam railway with historic steam locomotives and beautifully restored train carriages, which in the past have transported both Queen Victoria and Queen Elizabeth II.

There are a large number of walking trails around the Isle of Wight, with self-guided routes being especially popular and generally staying close to the coastline. If you are a keen walker, you may like to consider an actual walking holiday, taking in the circular trail starting at Ryde. However, at some 65 miles / 105 km in length, this is quite a trek and can last up to seven days. A shorter route worth considering connects Yarmouth and Shanklin, being around 29 miles / 47 miles long and taking between two and three days to complete.

Open-top hop on / off guided bus tours operate throughout the day at hourly intervals during the summer season, travelling around the island in both directions. Run by Southern Vectic, these buses tend to head to the island's top tourist attractions, whilst providing informative commentary along the way. An alternative is the 'Island Coaster' service, where buses follow the southerly coastline, from Ryde to Yarmouth, stopping at Whitecliff Bay, Sandown, Shanklin, Ventnor, Blackgang Chine, Isle of Wight Pearl, Freshwater Bay, Tennyson's Monument and Alum Bay.

Address: Isle of Wight Airport, Embassy Way, Sandown, Isle of Wight, PO36 0JP, England
Tel: +44 (0)1983 402402
Sandown Airport offers both flying lessons and pleasure flights, providing some spectacular bird's eye views of the Isle of Wight. Your choice of transport ranges from fixed-wing planes and small microlights, to helicopters. This is certainly one of the most memorable ways to fully appreciate the layout of the island. 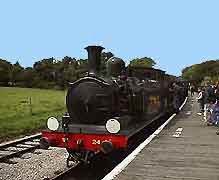 Address: Station Road, Havenstreet, Ryde, Isle of Wight, PO33 4DS, England
Tel: +44 (0)1983 882204
The small village of Havenstreet was a haven when Wootton Creek extended further inland. Today, Havenstreet is the headquarters and maintenance depot of the Steam Railway, which operates a 5-mile / 8-km line, principally maintained by the support of volunteers. The restored steam locomotives run between Wootton and Smallbrook Junction, with intermediate stations at Havenstreet and Ashey. Each year a number of train-related events are organised by the steam railway, such as the Island Steam Show in August and 'Day Out With Thomas', starring a Thomas the Tank Engine train shipped across from the mainland. Queen Elizabeth II took a trip on the railway during her visit to the Isle of Wight in 2004 and if you like, you can sit in the same royal carriage.

Address: Westridge Squash, Brading Road, South of Ryde, Isle of Wight, PO33 1QS, England
Tel: +44 (0)1983 811333
Waltzing Waters is an unusual show featuring moving fountains and illuminated water spouts. Synchronised with classical waltzes and various other kinds of music, this show lasts for around 40 minutes and takes place at the Aqua Theatre, within the Westridge Centre. Your entrance fee offers the chance to return within seven days, to catch a different show, although most will agree that one show is probably enough. 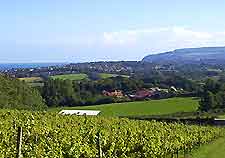 Address: Adgestone, near Sandown, Isle of Wight, PO36 0ES, England
Tel: +44 (0)1983 402503
The Adgestone Vineyard is situated just south of the popular Brading area, close to Sandown and Adgestone, where it produces more than 40,000 bottles of white wine every year. There is a small shop, a café and a tasting room, where the wines can be sampled. The guided tour is fairly basic, with a dated video presentation, and this attraction certainly gets very mixed reviews. Many tourists much prefer the tour, facilities and customer service at the relatively nearby Rosemary Vineyard.
Open hours: April to October, daily - 10:00 to 17:00

Address: Smallbrook Lane, Ryde, Isle of Wight, P033 4BE, England
Tel: +44 (0)1983 811084
The Rosemary Vineyard is situated on a 30-acre / 12-hectare site that was planted in 1986 and resides some 18 metres / 60 feet above sea level, where it takes full advantage of the island's mild climate. Attractions for tourists include lunches with free wine tasting and a small shop selling wine, cider and fruity liqueurs. Guided tours are often available and last around 30 minutes, with friendly staff explaining all about the winemaking process, the grape harvesting and the variety of equipment used. If you have time, you will find the cream teas quite memorable, particularly the enormous scones.
Open hours: daily, except Sundays during winter

Address: Shanklin Chine, Chine Hill, Shanklin, Isle of Wight, PO37 6BW, England
Tel: +44 (0)1983 866432
In 1545, the Shanklin Chine area of the island was the scene of a battle against French raiders, during which their commander was killed. This area now contains waterfalls, trees and lush vegetation, with footpaths and walkways. The Heritage Centre tells the history of this historic event and has many interesting displays, including one entitled 'Pipe Line Under the Ocean' (PLUTO). At the entrance, look out for the 40 Royal Marine Commando monument.
Open hours: daily, April to mid-May - 10:00 to 17:00; mid-May to mid-September - 10:00 to 22:00; mid-September to October - 10:00 to 17:00

Address: Watery Lane, Newchurch, Sandown, Isle of Wight, PO36 0LX, England
Tel: +44 (0)1983 867122
Recently upgraded, Amazon World is situated next to Thompson's Café, Plant and Garden Centre, close to Shanklin and Sandown. Attractions include outside animal enclosures, free-flying exotic birds, marmosets, monkeys, endangered species and rainforest areas. Children will enjoy stroking some of the animals, watching the feeding sessions (coatis, ocelots, penguins, tamarins and tapirs) and listening to the keeper talks. The lemur walkway is another highlight, while next to the car park is a picnic area, playground and the 'Education Lodge'.
Open hours: daily from 10:00
Admission: charge, discounts available for children

Address: Newnham Road, Binstead, Ryde, Isle of Wight, PO33 3TH, England
Tel: +44 (0)1983 566801
Located on the north-eastern side of the island, close to Staynes Copse, Puckers Copse, and the Ryde Lawn Tennis and Croquet Club, this once popular tourist centre has now changed its focus to developing its riding school. Lessons and country hacks are readily available at the Brickfields Horse Country, suiting experienced riders and beginners alike. The onsite cafe offers a good choice of hot snacks, suiting those waiting or returning riders in need of some sustenance.
Open hours: daily
Admission: charge