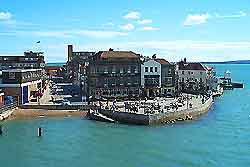 The Isle of Wight is a great place for holiday shopping and has many hundreds of independently owned stores and high-street chains selling a vast range of goods, throughout the main towns. There are also a number of specialist shops, including jewellers, art galleries, toy stores, antiques dealers and seaside gift shops, as well as countless boutiques.

Newport, the capital of the Isle of Wight, is a busy market town and comes with the largest concentration of shops. Apart from Newport's main precinct, there are a number of small interesting alleyways which are home to many specialist outlets. Ryde is also a popular area and has a splendid Victorian shopping arcade, which is lined with a variety of tempting stores. Cowes, on the north side of the Isle of Wight, is the town for buying sailing goods and has several large nautical shops and fishing outlets.

Most shops on the Isle of Wight open seven days a week, throughout the year, opening at around 09:00 until 17:30 or later, although some of the smaller stores may operate seasonal opening hours. On Sunday, shopping hours are generally shorter than the rest of the week, with some stores only choosing to open on Sundays during the summer holiday season.


Other Shops and Department Stores