Isle of Wight Attractions for Children 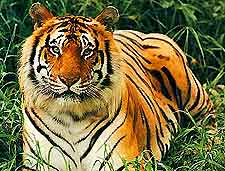 Widely known as being a popular holiday choice for families, the Isle of Wight comes with many attractions highly suitable for young children. Apart from the plentiful beaches and related coastal activities, there are theme parks, zoological gardens, aquariums, farms and country parks.

Ranking amongst the biggest and most popular attractions in the southerly Ventnor area, the Blackgang Chine Amusement Park enjoys a cliff-top location and is spread over some 16 hectares / 40 acres. The Isle of Wight Zoo is another popular choice, as is the Seaview Wildlife Encounter, the Godshill Model Village and the Fort Victoria Country Park. Most families also choose to pay a visit to the Needles Pleasure Park, where cliff-top chairlift rides down to see the multi-coloured sands of Alum Bay are a must. The Arreton Old Village may also appeal, with its traditional activities providing the chance to practice brass-rubbing with wax on over 50 copies of famous brasses from all over the United Kingdom.

Address: near Ventnor, Isle of Wight, England
Tel: +44 (0)1983 730052
Very much aimed at families, the Blackgang Chine Amusement Park is filled with fun attractions and features a rollercoaster named the Cliff Hanger, as well as a lengthy dinghy boat slide named Water Force, a tea cup roundabout, a large hedge maze, a fun dinosaur walk, a pirate-themed play area, a Wild West experience and a fairy castle. Interestingly, the park is actually one of England's oldest, being established in the 1840s, when it was based around a washed-up whale skeleton. It is worth noting that Blackgang Chine is prone to occasional landslides, which means that some of the rides and themed lands are sometimes closed and relocated for safety reasons.
Open hours: late March to October, daily - 10:00 to 17:00, extended summer hours
Admission: charge, discounts available for children, seniors and groups of four people

Address: Yaverland, near Sandown, Isle of Wight, England
Tel: +44 (0)1983 403883
Previously referred to as the Sandown Zoo and Big Cat Sanctuary, the recently renamed Isle of Wight Zoo is close to the beaches of Sandown and called home by one of the country's biggest collections of tigers. There are also lions, jaguars, black panthers, leopards and pumas, many of which have been rescued from private collections and now live in spacious landscaped enclosures, complete with bathing ponds and temples. The zoo has a lengthy history, being opened way back in the 1950s, and is also known for its capuchins, lemurs and spider monkeys.
Open hours: April to October, daily - 10:00 to 18:00, November to March - 10:00 to 17:00
Admission: charge, discounts available for children 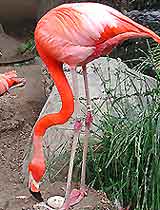 Address: Oakhill Road, Springvale, Seaview, Isle of Wight, England
Tel: +44 (0)1983 612153
Situated in the north-easterly Seaview area of the island, next to Ryde, the Seaview Wildlife Encounter was formerly named Flamingo Park and stands right next to the Solent. Families will be able to spend much of the day here, listening to the keeper talks and watching the Humboldt penguins being fed. You can also enter the wallaby enclosure, enjoy a decent meal in the restaurant and spend time at the indoor play centre. Notable resident creatures include otters, meerkats, alpacas, owls, parrots, and pelicans, as well as a large collection of flamingos and other waterfowl. When you enter the Tropical House you will discover many free-flying birds, including java sparrows, diamond doves, weavers and Californian quail.
Open hours: daily, April to September - 10:00 to 17:00, October - 10:00 to 16:00
Admission: charge, discounts for seniors, families (2 + 2) and children ages under 15, children aged under three are free

Address: Alum Bay, Isle of Wight, England
Tel: +44 (0)1983 752401
This large amusement park is one of the busiest and best-known family themed attractions on the island. Set alongside Alum Bay, visitors can choose between some basic fairground-style rides, a chairlift ride to the beachfront and a glass-blowing centre with regular demonstrations. In the sand shop you will find multi-coloured sand collected from Alum Bay, which is completely natural and can be used to fill clear-plastic animals and other shapes, creating stripy patterns. Nearby, the Needles Battery cafe comes highly recommended, while during the summer there are also spectacular fireworks displays here, held every Thursday night at around 21:30.
Open hours: daily, April to July - 10:00 to 17:00, August - 10:00 to 18:00, September to October - 10:00 to 17:00
Admission: free, charge for parking and rides (using books of vouchers sold onsite) 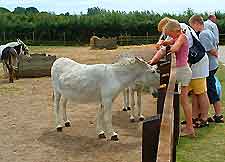 Address: Lower Winstone Farm, St. John's Road, Wroxhall, Isle of Wight, England
Tel: +44 (0)1983 852693
The Donkey Sanctuary is to be found on the southern side of the Isle of Wight, close to Ventnor. Home to more than 200 rescued donkeys, the sanctuary is a popular attraction and actually operates as a registered charity, being founded in 1987. If you have the opportunity to chat to one of the keepers, you will learn a little about the sanctuary's history and the animals themselves, and certainly enjoy your visit all the more. During the summer, the annual FauxFest Festival is a real highlight, with some 3,000 people coming to see some of the country's top tribute acts.
Open hours: daily
Admission: donations welcomed

Address: Staplers Road, Wootton, Isle of Wight, England
Tel: +44 (0)1983 883430
Butterfly World and Fountain World resides close to Newport and just down the road from Wootoon Common. This large, landscaped indoor garden features colourful butterflies from all over the world, with information boards dotted around to identifiy the species. There are also some small quail and exotic finches living with the butterflies, while elsewhere there are Italian and Japanese themed gardens, with water features and big koi carp. Although it won't take too long to see everything on offer here, the prices are quite reasonable. The adjacent Medina Garden Centre may also appeal if you have some time going spare.
Open hours: April to October - 10:00 to 17:00
Admission: charge, discounts available for children and families

Address: Old Vicarage Gardens, Isle of Wight, England
Tel: +44 (0)1983 840270
This impressive model village resides on the southern side of the island, in the village of Godshill and close to Shanklin. Maintained by a full-time modelmaker and an enthusiastic gardener, the Godshill Model Village really is beautifully constructed and well-maintained, with its scale layout of 1:10 incorporating hundreds of dwarfed trees and a small model railway. Visitors should allow roughly an hour to explore the village, no doubt taking lots of photographs along the way.
Open hours: daily, March, October - 10:00 to 16:00, April to September - 10:00 to 17:00
Admission: charge, discounts available for children and families

Address: Coleman's Lane, near Porchfield, Isle of Wight, England
Tel: +44 (0)1983 522831
Lying close to Parkhurst Forest and just a short drive to the west of Newport, via Forest Road (A3054), Coleman's Farm Park offers many hands-on activities, a model railway, tractor trailer rides, and play barns with slides, picnic tables and bales of hay. Petting the animals is a highlight for many, with ponies, lambs, rabbits, guinea pigs, goats and pigs. Those aged 11 or over may like to try their hand at driving a real tractor. However, it should be noted that this attraction tends to get rather mixed reviews, with many people commenting on the high prices, low numbers of animals and basic facilities.
Open hours: Tuesday to Sunday
Admission: charge, discounts available for children

Address: Main Road, Arreton, Isle of Wight, England
Tel: +44 (0)1983 528353
Located part-way between Horringford and Newport, the Arreton Old Village is proud to say that it has been completely traffic-free since 1893. Many traditional crafts are practiced here, with local artisans selling everything from handmade ornaments and glassware, to ceramics, toys, sweets and art works. There is also a Penny Arcade with themed Victorian slot machines, a barn pub, soft play equipment, a brass-rubbing centre and a medieval carp pond, the latter of which is sited next to St. George's Church.
Open hours: daily - hours vary
Admission: charge, discounts available for children

Address: Fort Victoria, Isle of Wight, England
Tel: +44 (0)1983 761553
Located on the north-western shore, the Fort Victoria Country Park encompasses some 50 acres / 20 hectares and offers a pleasant afternoon out for families. Visitors will be able to stroll along woodland trails whilst enjoying views of the Solent and looking out for the resident red squirrels. Fossil hunting is a popular activity along the beachfront, while further attractions include the indigenous sealife living within the Marine Aquarium, the solar system shows at the Island Planetarium, the enormous indoor Model Railway, and Verdi's Cafe, with its light snacks and waterfront panoramas. Also onsite is the Underwater Archaeology Centre, where you can learn all about the island's extensive maritime heritage.
Open hours: April to October, daily - 10:15 to 16:30; end of November to March, Thursday to Monday - 10:15 to 16:30, running of trains weather dependent
Admission: charge, discounts available for children and seniors, free for children under five years old 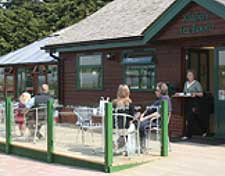 Address: 5 Acres Farm, Staplers Road, Newport, Isle Of Wight, England
Tel: +44 (0)1983 530885
Founded in 1999 and located in Newport, close to Butterfly World and the Fattingpark Copse, the Owl and Monkey Haven provides something of a sanctuary for both birds of prey and many different primates, who were previously in the need of rehoming and rescuing. Visitors will find everything from European eagle owls and snowy owls, to colobus monkeys, capuchins, gibbons, lemurs, macaques, marmosets and tamarins. Various events take place here most days, including breakfast-time feeding demonstrations, guided lunchtime feeding tours, owl handling and animal encounters. You can even try your hand at being a 'keeper for the day'. The Xhabu's Tea Room is situated onsite should you require refreshments, while there is also a gift shop selling locally made handicrafts, play areas for toddlers and older children, and the Wise Owl Lodge, which is reserved for schools, groups and birthday parties.
Open hours: February, March and October, daily - 10:00 to 16:00; April to September, daily - 10:00 to 18:00; November and December, Saturday and Sunday - 10:00 to 16:00
Admission: charge, discounts for seniors, families and children ages under 14, children aged under three are free