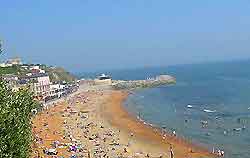 The summer season is understandably the time when most tourists choose to enjoy a holiday on the Isle of Wight, often coming here as a family and heading straight for the beaches. Alum Bay is amongst the most famous beaches on the island and is well-known for its multi-coloured sands and picturesque scenery.

Further notable coastal stretches on the Isle of Wight are at their very best around Bembridge, Ryde, Sandown, Seaview, Shanklin and Ventnor, as well as at the bays of Colwell, Compton, Freshwater, Gurnard, St. Helen's and Whitecliff. The beaches of East and West Cowes are also extremely popular expanses, particularly when a sailing regatta is taking place just offshore.

Ryde has three wide sandy beaches - Ryde West Sands, Ryde East Sands and Puckpool. These are safe and suitable for shallow bathing, with a number of good facilities nearby, for both adults and children.

Seaview has three popular beaches - Springvale, Seagrove Bay and Priory Bay. This area also features a large number of rock pools when the tide is out.

St. Helen's Bay is particularly good for swimming and has a fine sandy beach. There are also a number of large sand dunes, which are the habitat of much wildlife in this area.

Sandown is renown for long sandy beaches and has excellent facilities. This is one of the most popular family beaches on the Isle of Wight and is ideal for both swimming and sunbathing, although it should be noted that it can get crowded during the peak season.

There are three beaches in the Shanklin area - Appley, Hope and the Esplanade. These beaches provide a sandy shoreline and are well sheltered by nearby cliffs. Shanklin is popular for swimming, sunbathing and building sandcastles. 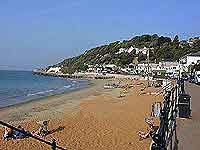 Ventnor boasts a sandy / shingle beach, which has a number of steep shelves caused by strong waves. Situated next to a small esplanade, Ventnor's beachfront provides safe bathing, boating and angling.

Compton Bay is one of the most popular beaches on the Isle of Wight and the golden sands stretch for more than 1 mile / 1.5 km. This spot is ideal for swimming, walking, surfing, windsurfing and other water sports. Particularly interesting attractions at Compton Bay include dinosaur fossils and numerous rock pools.

Freshwater Bay has an attractive sheltered area, with a mixture of sand and pebbles. This beach provides good swimming opportunities, although the water does become deep very quickly. 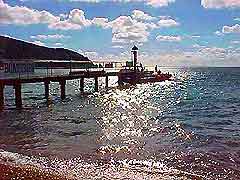 This predominantly pebbly beach has strong tidal currents and can be accessed by chairlift or by foot from the Needles Pleasure Park.

Totland Bay is an excellent family resort with a sheltered beach made up of sand and shingle. Further highlights include safe swimming, beach shops, cafés and other general seaside amenities.

The busy family resort of Colwell Bay features a long sandy stretch, which is ideal for swimming, paddling and general seaside fun.

Gurnard Bay has an excellent beach which is perfect for family bathing, with shallow calm waters and fine shingle. A number of water sports are popular in Gurnard Bay, including both surfing and sailing.

The sand and shingle beach of West Cowes, on the north coast of the Isle of Wight, is an interesting vantage point for watching sailing and other water sports in the Solent area.

East Cowes is the perfect spot for viewing the popular yacht racing around the Isle of Wight, while other attractions include a padding pool and a nearby playground area for children.

Bembridge is a well-known sailing centre with a foreshore on three sides, rock pools and a large beach area.

This sandy golden beach is safe for swimming and also features a good café. Whitecliff Bay has steep cliff access along a path, which offers spectacular views.