Getting Around, Isle of Wight Travel, Transport and Car Rental 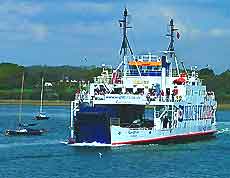 The Isle of Wight is well served by the public transport system, which includes an excellent network of buses and trains, providing the island with good connections throughout. There are many interesting towns, villages, tourist attractions and important landmarks on the Isle of Wight, and the majority of visitors choose to base themselves in a prominent town and then travel around the island, visiting the numerous coastal areas and beaches.

Cars are often the preferred method of transport for excursions and when combined in length, the island's roads rather surprisingly measure in at just under 500 miles / 805 km. If you prefer to take things at a more leisurely pace, then foot passengers arriving by ferry can bring bicycles, or alternatively bikes can be hired in most towns. Popular cycle routes include the Sunshine Trail (taking in Sandown, Shanklin, Godshill and Wroxhall), the Troll Trail (Cowes to Sandown) and the Round the Island Cycle Route, which stretches for just over 37 miles / 60 km and is suited to the more experienced of cyclist.

The Isle of Wight has two small private airports, Sandown Airport (EGHN) and Bembridge Airport (BBP), where aircraft, including planes and helicopters, can be chartered. Daily pleasure trips over the island are provided here. Other more major air facilities on the mainland include both Southampton Airport (SOU) and Bournemouth Airport (BOH), while the main London Airports are less than two hours away by car. 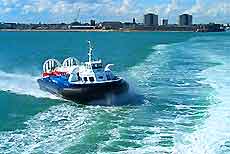 With almost 400 ferry and hovercraft crossings each day, it is easy to reach the Isle of Wight from the mainland. Many of the ferries transport cars and there are also some high-speed passenger ferries available, being especially speedy and ensuring a fast arrival.

Connecting bus services and taxis are readily available at the ports. The three main Isle of Wight ferry and hovercraft operators are:

The island is served by a number of major roads, which connect the towns, villages and beaches. Driving around the Isle of Wight is very easy and many tourists holidaying here choose to rent cars, or bring their vehicles by ferry. The coastline on the lower half of the island is edged by the A3055 Military Road / Lesson Road / Sandown Road, while Ryde and Yarmouth are linked by the A3054 Forest Road.

There are plenty of parking garages and off-street parking areas available throughout the island, and a number of car rental outlets based within the larger towns.

Much of the Isle of Wight is well pedestrianised and one of the best options is to explore the towns by foot. This is an excellent way to sightsee and shop, and finding your way around most towns is very straightforward. Many of the principal sights and attractions are within easy walking distance of each other in towns such as Cowes, Newport, Ryde and Ventnor.

Tel: +44 (0)1983 827005
The island's bus system is operated by Southern Vectis and covers most locations. Buses on the Isle of Wight are heavily used by both locals and tourists alike, although do provide a particularly inexpensive way to travel around. Local buses and coaches connect towns such as Arreton, Brighstone, Calbourne, Chessell, Cowes, Fishbourne, Godshill, Mottistone, Newport, Ryde, Sandown and Yarmouth. Bus passes, known as 'Rovers Tickets' are available for set periods and these can be particularly cost-effective. Most buses depart from the main bus station in Cowes, where timetables and route information can be obtained.

Also of note, various coach companies offer scenic excursions around the island, travelling to many of the most appealing tourist-friendly towns and villages.

Taxis on the Isle of Wight are one of the most convenient ways to get around and can be easily arranged by telephone. and there are a number of reputable taxi firms that your hotel can recommend. Additional taxi charges on the Isle of Wight can be made for luggage, travel late at night, extra passengers and travel on public holidays.

Bicycles are a popular way to travel around recreational areas of the island, with scenic trails leading you around the coastline and beaches. There are a number of bicycle rental shops available in the larger towns, such as Top Gear on Terminus Road in Cowes, the Bike Shed at Perreton Farm in Newport, TAV Cycles on the High Street at Ryde, and Wight Cycle Hire on Yarmouth's Station Road.