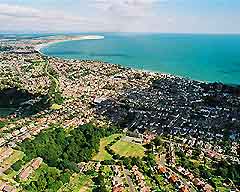 Although many people travelling to the Isle of Wight choose to catch a ferry from Southampton or Portsmouth and simply sail across the Solent, others prefer to fly here. The island comes with two small private airports, Sandown and Bembridge, although it should be noted that these can only handle small private aircraft, with permission being required for all landings.

Tourists flying in from abroad will likely need to land at a nearby international air facility first, before arranging onward transportation. If you wish to fly to the mainland and catch a ferry, then nearby airports are to be found in Bournemouth, Portsmouth and Southampton. Further afield are the airports of London, namely Heathrow, Gatwick, Stansted, Luton and London City, all of which are less than two hours away by car or National Express coach.

Address: Embassy Way / Scotchells Brook Lane, Sandown, Isle of Wight, England
Tel: +44 (01983 582181
Sandown Airport is situated on the east coast of the Isle of Wight, being located part-way between Horringford, Sandown and Shanklin, where it generally handles private charter flights only. All light aircraft are welcome to land here, for a small landing fee. The Cheverton Copse Holiday Park is close by and serves as a useful point of reference, as does the Old Barn Touring Park.

Address: Sandown Road / Longlands Shute (B3395), Bembridge, Isle of Wight, England
Tel: +44 (0)1983 872050
Bembridge Airport is to be found on the east coast of the Isle of Wight, where it can arrange private charter and air taxis, ranging from light aircraft to VIP Airbus. Located close to the village of Bembridge, Steyne Wood and Culver Down, the airfield also offers pleasure flights and is home to the Vectis Gliding Club.

Flying into London you will arrive at one of the capital's four international airports, Heathrow (LHR), Gatwick (LGW), Stansted (STN) and City Airport. They are all less than an hour from the city centre and come with National Express coaches, offering onward transport.

Address: East London, Royal Docks, E16
Tel: +44 (0)20 7646 0088
London's fourth airport resides within the trendy Royal Albert Docks, where it is around 144 km / 87 miles from the Isle of Wight. Only European flights are handled here, with shuttles frequently running between Canary Wharf and central Liverpool Street.