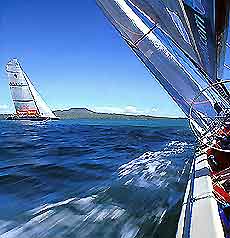 The Isle of Wight comes with a real assortment of sports facilities, many of which are strongly influenced by its lengthy coastline. Sailing regattas, fishing, surfing, windsurfing and more recently kitesurfing are all popular activities around the island's principal beaches, such as Cowes, Gurnard, Freshwater Bay, Ryde, Sandown, Totland Bay and Ventnor.

Every other year, the International Island Games Association organises the Island Games, which date back to the mid-1980s and see many participating sports teams from islands such as Jersey, Guernsey, the Isle of Man, Shetland and Rhodes. The Isle of Wight has hosted this huge event twice since it began, in 1993 and more recently in 2011. The main sports include archery, athletics, cycling, football, golf, sailing, swimming, tennis and volleyball, amongst others.

If you enjoy fresh air, beautiful countryside and coastal views, then walking along the many bridleways and paths on the Isle of Wight will be a real treat. In fact, with more than 500 miles / 800 km of public pathways, there is certainly plenty of choice. 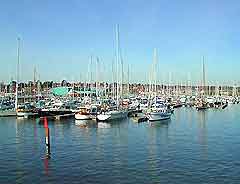 Coarse fishing is at its best at the Rookley Country Park, while there are also three large well-stocked lakes at Nettlecombe Farm. Sea fishing takes place from a number of piers and beaches, with offshore boat trips being simple to arrange.

Tennis is certainly amongst the most popular sports on the island and there are many courts just waiting to be used, generally being sited within the largest and busiest public parks.

There are a number of swimming pools on the island, although during the summer months, most holiday makers simply head to the sea.

Those who enjoy cycling in their spare time will find that the island comes with a superb cycleway, which stretches for more than 60 miles / 97 km and takes in many scenic parts of the coastline. Passenger ferries will accept bicycles onboard, while bike shops offering rentals are in plentiful supply within towns such as Cowes, Freshwater Bay, Ryde, Sandown, Shanklin, Ventnor and Yarmouth.

The main towns on the island all come with plenty of gyms and sports centres to choose between, with a good selection being based in Newport, Ryde, Sandown and Ventnor: 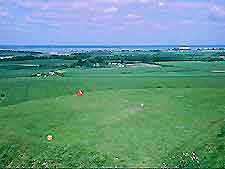 The Isle of Wight contains numerous golf courses, a number of which have been designed to capture some superb coastal views. Popular courses can be found at Cowes, Freshwater, Newport, Sandown and Ventnor. 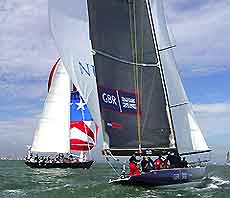 The Isle of Wight offers truly unrivalled sailing facilities around the island, suiting all types of sailing boats, yachts and motor boats. There are numerous marinas and yacht clubs on the coastal areas, many of which hire boats by the day or week. Summer sailing regattas are a huge tourist magnet, with Cowes Week drawing literally thousands of participants and spectators.

If you are a keen surfer holidaying on the island and looking to take in some strong waves, then Compton Bay is most definitely the place to visit. Located on the south-western side of the Isle of Wight, Compton Bay has become famous for its reliable surfing conditions and many of the island's most accomplished surfers can often be seen in action here. Of particular interest, when the tide is out, a series of fossilised dinosaur footprints become visible.

There are many shallow and safe places where you can windsurf, including Seagrove Bay at Seaview, Silver Beach at Bembridge and Sandown Bay. More experienced windsurfers head to Compton, Gurnard, Ryde and Yaverland, away from the most popular beaches.

Address: Quay Road, Esplanade, Ryde, Isle of Wight, PO33 2HH, England
Tel: +44 (0)1983 615155
The Planet Ice Arena is situated on the Esplanade at Ryde, on the north-eastern side of the island, where it is open on a daily basis. Different themed skating sessions are offered, including public skating, lessons, discos and party nights. The rink is home to the Wightlink Raiders ice hockey team, who often play games here. Regular ice shows are staged at Planet Ice and in the past these have included Olympic skaters and professional skaters, being hosted by Nicky Slater and Kyran Bracken from ITV's Dancing on Ice.

Address: The Pavilion, Esplanade, Ryde, Isle of Wight, PO33 2EL, England
Tel: +44 (0)1983 617070
Next to the Ice Arena is the Ryde Superbowl (formerly named LA Bowl). This 22-lane tenpin bowling alley comes with novelty glow-in-the-dark bowling, a café area, a fully licensed bar, amusements, a pool table and an upstairs nightclub. The Ryde Superbowl is open daily, all through the year, from 10:00 until late.