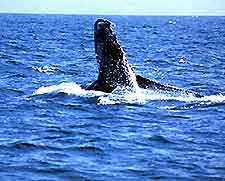 Whale watching along the coastline of Western Australia has become a popular attraction for visitors and locals in Perth. There are a number of whale-watching tours available close to central Perth and the whale-watching season generally runs between September and November, when the enormous humpback whales pass close to the coastline, during their annual migration south in the Indian Ocean. 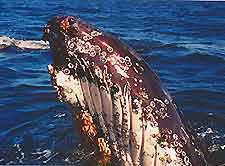 Humpback whales are the fifth largest of the great whales and adult humpback whales can measure up to 19 metres / 62 feet, weighing around 40 tonnes. This vulnerable and protected species of whale begin migrating each winter, leaving the Antarctica area at the end of April, to travel to the warmer waters of Perth and Western Australia in early spring. The first humpback whales to arrive in the waters at Perth are usually the newly pregnant female whales, followed by mature males and the mothers with their newly-born humpback whale calves.

The giant humpback whales off Perth are a common sight from September to November and these 'gentle giants' often migrate in large groups. The Perth whale-watching boat trips are able to get close enough to the humpback whales to observe them in great detail and numerous photo opportunities are available during the cruise. However, there are strict rules when whale watching in Perth and these include no swimming, feeding or touching of the whales. Also, marine vessels should maintain a reasonable distance from the whale and not cause the whale to alter its direction. 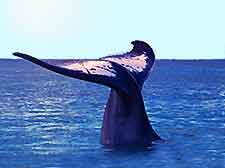 Whale-watching tours began in the waters of Perth in 1989 and since then have proved to be one of the most popular tourist attractions in Perth and Western Australia, during the whale-watching season. Regular boat tours of varying sizes depart from Perth's Sorrento Quay, Hillarys Boat Harbour and at East Fremantle. Please contact the Aquarium of Western Australia for information about the latest whale-watching boat trips.