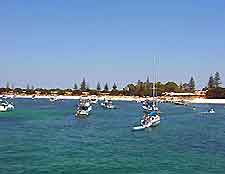 If you feel that you have exhausted all of the attractions that Perth has to offer, or are simply looking for a change of scenery, then do consider planning some day trips and exploring just a smidgen of Western Australia's additional offerings. The sunny and tranquil location of Rottnest Island is an ideal excursion from central Perth, being easily reached by either a pleasant and scenic cruise down Swan River, or across from nearby Fremantle.

One of the main attractions at nearby Rockingham is the offshore Shoalwater Islands Marine Park, where small groups of visitors have the opportunity to snorkel and interact with friendly wild bottlenose dolphins. On the north coast of Perth you will find Yanchep, Guilderton and Lancelin - which feature a number of good spots for windsurfing. Further choices include outings to the Darling Range and the Avon Valley, where the towns of Toodyay and York are worth looking out for. 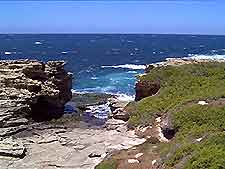 The best way to travel around the island is by bicycle, as cars are not actually allowed here and although buses are available, the bus service on Rottnest is minimal. Bicycle tours of the island cover around 26 km / 16 miles and last around three hours or longer. Travelling around by bicycle is simple and the main road circles the entire island, providing many spectacular and quite picturesque views of the surrounding area.

Amongst the top attractions on Rottnest Island is the local colony of 'quokkas', a small creature resembling a wallaby. These charming animals are marsupials and are particularly concentrated around Government House and Herschell Lake. The following places of interest are also of note: 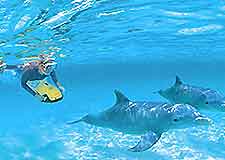 Address: Rockingham Tourist Centre, 43 Kent Street, Rockingham, Western Australia (WA), Australia
Tel: +61 (08) 9592 3464
Rockingham is located around 47 km / 30 miles to the south of Perth city centre and was founded in 1872 as a main port. This charming seaside town is full of nostalgia and is within easy reach by car or bus.

Visitors to Rockingham will discover a number of popular Dolphin Tours around the Shoalwater Islands Marine Park, where you can take a boat trip and see wild dolphins leaping about and playing. The dolphin boat tours depart from the jetty on Palm Beach and also from Perth itself. Other highlights include: 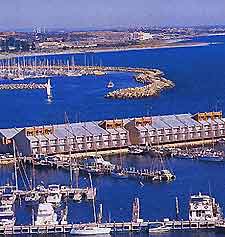 Address: Town Hall, Kings Square, Fremantle, Western Australia (WA), Australia
Tel: +61 (0)8 9431 7878
Fremantle is one of the most stunning areas of Western Australia and this region is just 19 km / 12 miles to the south-west of Perth city centre. The busy city of Fremantle has completely reinvented itself over the years and was first founded by settlers in 1829, at the newly constructed Swan River Colony.

The South Terrace is amongst the principal tourist magnets and is known locally as the 'Fremantle Cappuccino Strip', since it features numerous street cafés. Fremantle also boasts many historic areas, particularly between Phillimore Street and Marine Terrace in the West End, with a number of important heritage buildings. Other attractions in the Fremantle area include: 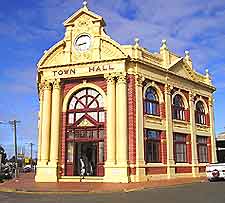 Address: 105 Avon Terrace, York, Western Australia (WA), Australia
Tel: +61 (08) 9641 1301
Situated around 90 km / 61 miles to the east of central Perth, York is a particularly interesting and historic town. The town lies in the glorious Avon Valley and is centred around its main street, the Avon Terrace, which has been restored and includes many of the original features present during the 1890s gold rush. Visiting York is almost like stepping back in time and this is such an important town that it is actually protected by the Australian National Trust.

York is the oldest inland town in Western Australia and was founded in 1831, just two years after the Swan River Colony, and is easy to explore either on foot or bicycle. Full of things to see and do, local attractions include:


Here is a list of many of the tourist information centres throughout Western Australia:


Other specific tourist attractions within reach of Perth and worth a visit include: