Perth Weather, When to Go and Climate Information 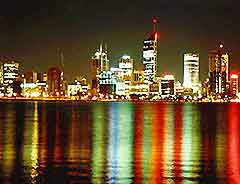 Perth's wonderful, Mediterranean-style climate provides distinct seasons, together with year-round sunshine and more rain during the winter and spring months.

The summer months of December, January and February enjoy especially high temperatures. although it should be noted that Perth also experiences more than its fair share of wet weather, being Australia's fourth-wettest state capital. Hot summer days often feel fresh, thanks to the frequent arrival of the south-westerly 'Fremantle Doctor' sea breeze


The autumn months of March, April and May are always extremely popular months for tourism, with fine days, mild nights and generally very pleasant weather. Between September and November, the spring climate is extremely warm, with the likelihood of rainfall increasing as summer approaches.

Average summer temperatures in Perth are around 25°C / 77°F, although with extremely sunny weather, these temperatures can exceed 40°C / 104°F. Perth generally boasts some 3,000 hours of sunshine each year, making it understandably one of the most appealing holiday locations in the world.

The following are the normal daily temperature ranges for Perth: