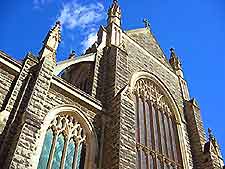 Perth is a city with many imposing churches and religious buildings. There are no less than two cathedrals in this city, with Roman Catholic St. Mary's being the oldest and thoroughly restored as recently as 2010.

Just minutes away from St. Mary's and to the south-west is St. George's Cathedral, which functions as Perth's main Anglican church and stands alongside the Government House, being close to the Supreme Court Gardens, the Alf Curlewis Gardens and the May Holman Centre. During the Meckering earthquake of 1968 the bell tower suffered structural damage and as a result of this, much earthquake protection and bracing work has been incorporated within the overall structure. 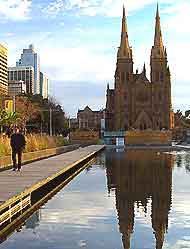 Address: 38 Saint George's Terrace, Perth, Western Australia (WA), Australia
Tel: +61 (0)8 9325 5766
Located in central Perth, Saint George's Cathedral is one of the most distinctive buildings in the whole of Western Australia. Dating back to the latter part of the 19th century, this spectacular cathedral is used as the offices for the Anglican Church and still holds regular services. Attractions include stone carvings, many original period features, memorials to famous pioneers in Western Australia, seasonal religious events and the peal of bells, a memorial to Queen Victoria.
Open hours: daily
Admission: free

Address: 3 Yule Avenue, Middle Swan, Perth, Western Australia (WA), Australia
Tel: +61 (0)8 9274 2661
The enchanting Church of St. Mary stands in the scenic Swan Valley area and was built in 1869, when it replaced the original Octagonal Church, which was erected in 1840. Highlights at Saint Mary's include a particularly historic graveyard, many interesting features inside and some splendid views of the surrounding area between Swan River and Jane Brook.
Open hours: hours vary
Admission: free

Address: Henry Street, Henley Brook, Perth, Western Australia (WA), Australia
Tel: +61 (0)8 9274 2661
The All Saints Anglican Church is the oldest church in the entire city and was built on the site shortly after Captain Stirling held worship here during his exploration trip of the Swan River in 1827. All Saints is of great historical significance locally and during the year hosts a number of events, including concerts.
Open hours: hours vary
Admission: free

Address: Stirling Square, Guildford, Perth, Western Australia (WA), Australia
Tel: +61 (0)8 9279 1141
Saint Matthew's Church, in the Guildford area, was originally built in 1860, but needed to be completely rebuilt just 12 years later after being badly damaged in a storm. Worth looking out for here is the surrounding moat, the eye-catching red architecture and the pleasant gardens.
Open hours: hours vary
Admission: free

Address: 427 William Street, Northbridge, Perth, Western Australia (WA), Australia
Tel: +61 (0)8 9328 8535
Built in 1904, the striking, white Perth Mosque is situated within the Northbridge district, in the heart of the city. Recently restored, the mosque is one of the most recognisable landmarks in this area and holds regular services each day.
Open hours: daily
Admission: free

Other churches and religious buildings in and around central Perth include: