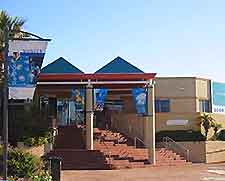 There are certainly more than a few attractions suitable for families on holiday in Perth, with many aimed at younger children, although both Cottesloe Beach and Leighton Beach are hard to beat on a sunny day. Starting its life in 1988 and formerly known as Underwater World, the Aquarium of Western Australia is extremely popular, being located on the northern Sunset Coast and within easy reach of Perth, by train, bus or car.

Located in between Windsor Park and Richardson Park, Perth Zoo comes highly recommended and is around five minutes' drive to the south of the city centre, close to the Mends Street Jetty and the Kwinana Freeway. These spacious zoological gardens date back to 1898 and cover just over 40 acres / 16 hectares. Alternatively, choose between Adventure World, the Cohunu Koala Park, the Scitech Discovery Centre and the Herdsman Lake Wildlife Centre, although young children will also be sure to enjoy a free afternoon in the playground at Kings Park. 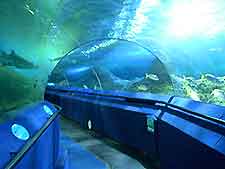 Address: 91 Southside Drive, Hillarys Boat Harbour, Hillarys, Western Australia (WA), Australia
Tel: +61 (0)8 9447 7500
The Aquarium of Western Australia is one of the region's most popular tourist attractions for holidaying families and features large landscaped aquariums, feeding demonstrations, more than 2,500 examples of sea life and 400 species, and a huge 98-metre / 321-foot underwater tunnel. Visitors will also get the opportunity to get close up to some of the more friendly marine creatures in the 'Touch Pool' area. With big sharks, sea turtles, a huge seal enclosure and more intriguing sea life such as sea dragons and venomous fish, the aquarium is conveniently close to the Stirling train station. Nearby places of interest include the Hippo Creek African Grill, Sorrento Quay and the Naturaliste Marine Discovery Centre.
Open hours: Thursday to Tuesday - 10:00 to 17:00, Wednesday - 10:00 to 21:00
Admission: charge, discounts available for children

Address: 179 Progress Drive, Bibra Lake, Perth, Western Australia (WA), Australia
Tel: +61 (0)8 9417 9666
Adventure World is a large theme park located within the southerly suburb of Bibra Lake, where it opened in the early 1980s and now boasts more than 20 fun rides, including two rollercoasters and some nine water rides. Children will enjoy zooming around on the Grand Prix Raceway go-karts and playing on the Bumper Boats, as well as splashing around in the Paddleboats and the Lagoon pool. If you are feeling peckish, then you can enjoy a bite to eat at the Burger Bar, Surf Shack or one of the cafes.
Open hours: September to April, daily - 10:00 to 17:00
Admission: charge, discounts available for seniors, children and families 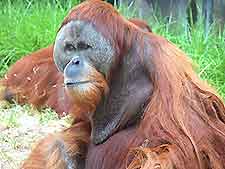 Address: Nettleton Road, Byford, Perth, Western Australia (WA), Australia
Tel: +61 (0)8 9525 4788
Founded in the early 1980s and roughly 40 minutes south of downtown Perth, the Cohunu Koala Park is a great place to visit with all of the family and provides visitors with the opportunity to observe native Australian animals in natural surroundings, such as sizeable groups of koalas, wallabies, emus and dingoes. There are also wading birds and a large walk-in aviary enclosure, with many colourful birds, including talking parrots. Visitors can be photographed holding a koala, take a trip on the miniature railway and enjoy refreshments from the kiosk (open between 11:00 and 15:00).
Open hours: daily - 10:00 to 17:00
Admission: charge, discounts available for children

Address: City West Railway Parade / Sutherland Street, Perth, Western Australia (WA), Australia
Tel: +61 (0)8 9481 5789
The impressive Scitech Discovery Centre can be found in central Perth, close to the Harold Boas Gardens, and opened its doors to the paying public in 1988. This popular non-profit organisation features more than 160 interactive science exhibits and activities, which are generally aimed at children aged 12 years old and under. Onsite are a host of technology displays and temporary exhibitions rotated every six months, as well as many seasonal events, a cafe and a science-themed gift shop. The adjacent Horizon planetarium opened in 2004 and is part of the City West complex.
Open hours: daily - 10:00 to 17:00.
Admission: charge, discounts available for children

Address: 304 - 308 South Western Highway, Wungong, Western Australia (WA), Australia
Tel: +61 (0)8 9399 6927
The Armadale Reptile Farm lies on the south-easterly outskirts of Perth, being roughly 40 minutes away by car and home to over 200 different reptiles, many of which have been rescued and rehabilitated. There are large snakes, goannas, huge lizards, turtles and even some exotic frogs. Founded in 1995, this attraction also houses large fruit bats, kangaroos, possoms and wombats, as well as enormous wedge-tailed eagles and friendly rainbow lorikeets.
Open hours: daily - 10:00 to 16:00.
Admission: charge, discounts available for seniors, children and families, children three years old and under are free

Address: Arthur Street, Whiteman Park, West Swan, Perth, Western Australia (WA), Australia
Tel: +61 (0)8 9274 2202
The Caversham Wildlife Park can be found in the scenic Swan Valley area of Perth and is full of native Australian animals. Established in the late 1980s, this is actually the only wildlife park of its kind in the whole of Western Australia. The park has grown enormously, both in size and popularity, and now attracts over 100,000 visitors each year. Specific attractions include over 200 species, such as wombats, Tasmanian devils, koalas, grass owl and cassowaries, while there are also a number of exotic animals at the wildlife park, such as monkeys, llamas, buffalo and camels. Visitors will particularly enjoy the opportunity to get close-up and hands-on with many of the park's friendliest residents.
Open hours: daily - 09:00 to 17:00.
Admission: charge, discounts available for seniors, children and families

Address: Flynn Street, Wembley, Perth, Western Australia (WA), Australia
Tel: +61 (0)8 9387 6079
Situated just 6 km / 3.5 miles to the west of Perth city centre and managed by the WA Gould League, the Herdsman Lake Wildlife Centre is full of native birds and provides a sanctuary for local wildlife. Many Australian birds come here to breed around the wetlands, close to the lake. Visitors will find wildlife observation areas, a playground, large expanses of grassland, walking and cycle trails, boardwalks, picnic areas and an original settler's cottage dating back to the 1920s.
Open hours: Monday to Friday - 08:15 to 16:30, Saturday and Sunday - 13:00 to 16:30
Admission: charge, discounts available for children

Address: Allens Road, Mundaring, Perth, Western Australia (WA), Australia
Tel: +61 (0)8 9295 2244
Founded in 1991 in the scenic Perth Hills, the Hills Forest Activity Centre is full of things for children to see and do. Attractions and activities include a Discovery Centre, amphitheatre, regular displays and presentations, guided woodland walks, musicals and even abseiling. The centre is not just popular with children, but with all of the family.
Open hours: daily - 08:30 to 16:00
Admission: charge, discounts available for children