Getting Around, Perth Travel, Transport and Car Rental 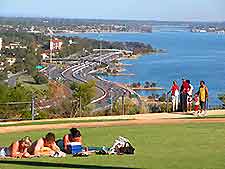 Perth, in Western Australia, is well served by the public transport system, which includes an excellent network of buses and trains, providing good connections throughout Australia. The city of Perth is situated close to many other interesting towns, cities, tourist attractions and important landmarks, and many visitors also travel outside of the city into the city's many suburbs, including Alexander Heights, Cuilacabardee, Fremantle, Malaga, Mandurah, Marangaroo and Sorrento.

Operated by Transperth, visitors to Perth will find that the reliable and popular public transport system is an ideal option for visitors to view regional points of interest. Buses, ferries and trains are all extremely efficient ways to travel to the numerous sightseeing attractions. 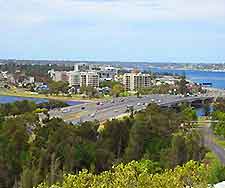 Perth has plenty of car parking in around the centre and finding places to park your car is not difficult. However, driving in the city centre can be a little confusing at times, as some of the roads are one-way only, and many of the street signs are not prominently positioned.

Many visitors to Perth also travel outside of the city and renting a car is the most popular way to travel. There are a number of busy highways and roads situated close by, including the Great Eastern Highway, offering fast and convenient routes when travelling both to and from the city.

Perth Airport (PER) / Arriving by Air

The city is served by Perth Airport (PER), the fifth largest airport in Australia.

Renting a car can be a particularly economical way to travel around the Perth area, with many firms offering discounts for car rentals of three days or more. Major car rental companies in the area include Avis, Budget, Europcar, Hertz and Thrifty Car Rental. 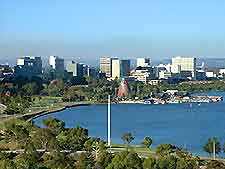 Operated by Transperth, bus travel in central Perth is free, on the regular Metrobus line. The CATS (Central Area Transit) buses travel around the Central Business District (CBD) and the suburbs around every ten minutes between 06:00 to 23:30, with a reduced service during the weekend. The main bus terminal is Central Bus Station on Mounts Bay Road, providing routes and timetables.

Coaches in the Perth and the Western Australia area travel further afield to nearby suburbs, towns and cities. Local coaches are an affordable and relaxing way to travel outside of Perth.

The Feastrack train service travels from Perth to Fremantle, Midland, Armadale Joonsalup and many of the other suburbs. This service runs from 05:30 to 23:00, with a reduced train service at weekends. Suburban and Bunbury train departs from the city station, which is situated on Wellington Street. Most trains in Western Australia are modern, electric, clean and full air-conditioned. Bicycles are permitted on trains during off-peak times and at the weekends.

Taxis in Perth are an economic option for shorter journeys and Perth's taxicabs travel all over the centre and suburban areas. Most taxis in Perth and Western Australia and modern, white, Ford or Holden cars and can be either hailed on the road or at Perth's central taxi ranks. The two main taxi companies that operate in the area are Swan Taxis and Black and White taxis.

Perth's taxis are one of the simplest ways to travel around Perth and West Australian. Taxis are usually fairly cheap and in the more quiet suburbs, taxis can be ordered by telephone and your hotel will happily recommend nearby, reputable taxi firms.

Bicycles are a particularly popular way to travel around many of the recreational areas of Western Australia. Much of Perth is flat and there are also countless cycle trails here, making cycling a safe and enjoyable way to discover the city. Wearing a bicycle helmet in Perth is required by law, and carrying drinking water at all times is sensible when cycling.