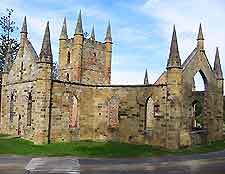 Like most of Australia's original settlements, the Tasmanian capital of Hobart was first established as a penal colony for British convicts, being based on the eastern shores of the Derwent River. Given Tasmania's vast untamed wilderness, the city's early convict history is unsurprising.

Hobart was founded in 1804 and is the second-oldest city in Australia. Its deep-water port is one of the best in the region, which helped the city evolve from convicts to shipbuilding. More recently, Hobart has developed a positive reputation for tourism and livability.

Concerns about the French

Partially in response to growing French interest in the South Pacific, the early settlements in Sydney were worried about losing their foothold on the untapped region of Oceania. Ships were sent to Tasmania to look for a viable place to set up a new colony and in 1803, a settlement was started at Risdon Cove. A year later, the settlement was moved across the river to Sullivan's Cove, where the city of Hobart was founded in 1804.

Though Hobart was really established to thwart the French from claiming the island of Tasmania, the British soon realised its potential as a penal colony due to its isolation. A number of settlements were built to house male and female convicts, including Port Arthur and Maria Island, both popular tourist attractions today.

By the 1820s, Hobart was a major port for the Southern Ocean whaling industry and one of the region's principal shipbuilding centres. Van Diemen's Land, as Tasmania was then known, was declared a separate colony in 1824 and Hobart Town was named its capital the following year. The port was busy in those years and famous for its wild scenes of debauchery. Nevertheless, the prosperity that the shipping industry brought also led to the creation of several historical landmarks such as the Botanical Gardens and Government House, helping to keep alive this time in history for future generations.

The 1830s and 1840s saw a period of devotion to changing the city from a den of lawlessness to one of culture and intelligence. Many of the beautiful sandstone warehouse buildings were constructed during this time, and institutions like the Theatre Royal, the Tasmanian Museum and Art Gallery and the Royal Hobart Regatta were all established during this period of Hobart's history.

In the 1890s, an economic depression hit all of the Australian colonies hard. The local economy fared better than some, perhaps due to its lack of industrialisation compared to other Australian colonies like Sydney. The World Wars did not affect Hobart much, so the city concentrated on local projects such as building a road to the summit of Mount Wellington in 1937 and the pontoon Hobart Bridge in 1943, as well as the iconic Tasman Bridge in 1960.

Today, Hobart enjoys a solid economy based around local industry and tourism. The creative and inventive community has established a thriving arts scene with institutions like the Tasmanian Symphony Orchestra now recognised around the world. Compact and scenic, the downtown area is an ideal travel destination for intrepid tourists who like a mix of urban amenities with their natural recreation.