The state capital, Hobart resides on the south-easterly side of Tasmania - which is both a state and island. Tasmania is located just a short distance south of Melbourne in Victoria, on the south-eastern side of mainland Australia, and is home to a population of over 500,000 residents, of which Hobart accounts for some 130,000 of this figure.

Hobart stands alongside the Derwent River and enjoys a scenic backdrop, provided by Mount Wellington. The Greater Hobart region encompasses a number of surrounding towns and beaches, including the Derwent Valley, Glenorchy and Lauderdale.

Being a fairly small and compact city, it is easy to find your way around Hobart. The streets in the city centre include a number of one-way roads and are organised as a gridwork around Elizabeth Street, where the Visitors Centre is to be found. The southerly waterfront area includes Sullivans Cove, Salamanca Place and Battery Point.

For maps of Hobart, bookshops along Patrick Street, Macquarie Street and Elizabeth Street are in good supply. In particular, the most useful maps include the Tasmanian Towns Street Atlas and also the Hobart Street Directory. 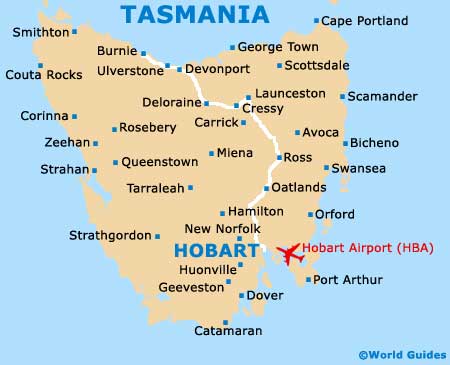