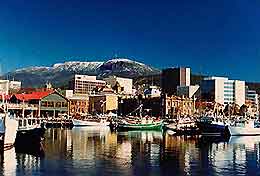 Hobart is situated on the large island of Tasmania and is the southernmost capital city in Australia. Straddling the breathtaking Derwent River, Australia's deepest harbour, Hobart is without doubt one of most beautiful areas in both Tasmania and Australia, with the city's background being dominated by the nearby Mount Wellington.

Founded in 1803, Hobart boasts numerous heritage and tourism areas just waiting to be explored, and although it has become known for being a particularly dry area of Australia, the city does contain some lush national parks and botanical gardens. The city regularly features many exciting festivals and events, including the Sydney to Hobart Yacht Race, a spectacular race that finishes at the waterfront at the end of each year.

Central Hobart is fairly easy to navigate and is arranged in a gridwork, being centred around the Elizabeth Street Mall, which is home to the tourist information centre and also the main post office. To the southeast is the Battery Point area, where you will find Princes Park and the waterfront Salamanca Place, the latter of which is lined by a series of attractive Georgian warehouses, showcasing traditonal colonial Australian architecture at its best. 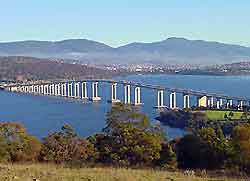 Budget hotels options are widespread in Hobart and are particularly concentrated in the suburbs, to the north and west. One of the most popular lodging areas is Battery Point, with hotels here often featuring magnificent waterfront views. Most are built from golden sandstone or brick, and many are historic buildings in their own right, dating back to the late 19th century or before. Sandy Bay tends to be a more expensive part of the city, while a good choice of cheap B&Bs reside within the North Hobart and New Town areas.

Hobart is home to many superb tourist attractions and these include the Tasman Bridge - a major freeway bridge built in the 1960s to cross the vast Derwent River; the Government House - featuring classical Victorian architecture and many original features; the Parliament House - a striking building in the Salamanca area of the city; the Port Arthur Historic Site - home to a number of outstanding historic landmarks, which attract more than 200,000 tourists each year; the Richmond Bridge - one of the oldest stone bridges in the whole of Australia; St. David's Cathedral - dating back to the mid-19th century; St. Mary's Cathedral - head of the Roman Catholic faith in Hobart; and the University of Tasmania (UTAS) - the fourth university to be established in the whole of Australia, containing around 9,000 students. 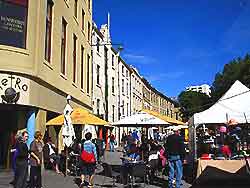 Other world-class Hobart attractions include Derwent River - directly responsible for much of the city's overall wealth and success, allowing ships and boats to travel right into the city centre; the Cadbury-Schweppes Chocolate Factory - with regular guided tours and a large chocolate shop; Constitution Dock - a trendy and relaxed dockland area, regularly hosting many exciting local festivals; the Old Hobart Town Model Village - a wonderful and historic representation how early Hobart appeared; the Bicentennial Park - with breathtaking coastal views and picnic spots; the Royal Tasmanian Botanical Gardens - including an authentic Japanese garden and collections of exotic plants; and Salamanca Market - a lively flea market held in the Salamanca district, which attracts more than 10,000 bargain hunters each week. More information about Hobart Tourist Attractions and Hobart Landmarks.

Hobart also has a large number of popular museums, providing interesting information about the rich Australian heritage of Tasmania. Major art galleries and museums in the Hobart and Tasmania area include the Maritime Museum of Tasmania - celebrating the nautical past of the nearby docklands; the Military Museum - dedicated to military memorabilia from the last two centuries; the Moorilla Museum of Antiquities - home to important local period treasures; the Tasmanian Transport Museum - featuring an extensive collection of lovingly restored steam locomotives; the Tasmanian Museum and Art Gallery - with an impressive collection of traditional, Colonial paintings; the Allport Library and Museum of Fine Arts - containing around 2,000 paintings, including many masterpieces; and Hobart's Carnegie Gallery - regularly hosting a number of temporary exhibitions, including works of art by both national and international artists, as well as those from the city and island. 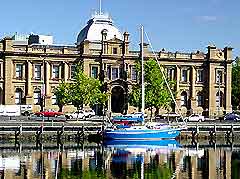 Attractions nearby Hobart include the districts and small towns of Brighton, Huon Valley, Huonville, Kingston, Margate, New Norfolk, Ponteville, Richmond, Taroona and the Tasman Peninsula area, which features excellent scuba diving locations, national parks, wildlife reserves and tiny villages. Tasmania is also home to a wealth of vineyards, wineries, breweries and hopfields, many of which are close to Hobart. Famous throughout Australia, these are located in picturesque spots, including the Derwent Valley, Glenora, Richmond, Huon Valley, Hobart's East Coast, the d'Entrecasteaux Channel area, Tasman Peninsula and the Coal River Valley.

Surrounded by water, Tasmania's capital city of Hobart is home to some of the most magnificent, sandy beaches on this Australian island. Many of these beaches are close to the city, next to the Derwent River on the east coast, and include Bicheno Beach, Carlton Beach, Clifton Beach, Cornelian Bay Beach, Long Beach, Margate Beach and Seven Mile Beach. The city of Hobart always has a friendly atmosphere, combined with a striking mixture of both historic and modern buildings, many of which were built in the early 18th century and are full of character.